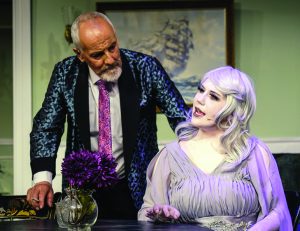 By Rob Vogt Local Press Writer
English Playwright Noel Coward wrote “Blithe Spirit” in six days in 1941, during the height of the Second World War, in part to get the minds of the British off the war for a few hours.
There is a lot going on in the world again today, with the pandemic still lurking in the background, the prices of everything going up, the war in Ukraine and so much more.
If you want to get your mind off everything for two hours, the Claresholm Arts Society is staging its own version of “Blithe Spirit” this weekend.
“We want to give people an opportunity to escape for a few hours,” said Carmelle Steel, the show’s production manager.
“Blithe Spirit” tells the story of a socialite and novelist who invites a medium to his house to conduct a séance. His motive is to gather material for his next book, but something else happens.
The ghost of his first wife appears, intent on disrupting his second marriage. Then the fun really begins.
“Blithe Spirit” is the first play the arts society has ever put on. All of its previous productions were musicals.
It runs on May 26 at 7 p.m.; May 27 for a dinner theatre; and May 28 at 1 p.m. and 7 p.m. at the Claresholm Community Centre.
The play is being led by first-time director Isabella DeDominicis, and the cast is made up of: Tracey Ohler; Peter Morton; Christin Slevin; Laci McLeod; Alec Harrison; Darla Slovak; and Arden MacDonald-Thomson.
“Our cast has worked really hard,” Steel said.
“I’m super proud of the work this cast has done.”
She noted a lot of hours have gone into the production of “Blithe Spirt”, from stage construction, painting and lighting, to hair, make up, costumes and much more, so she invites everyone to come out.
Tickets are still available through the “Eventbrite” website, or by contacting Carmelle Steel at 403-489-0885.
“It’s a chance to enjoy entertainment on the stage,” she said.