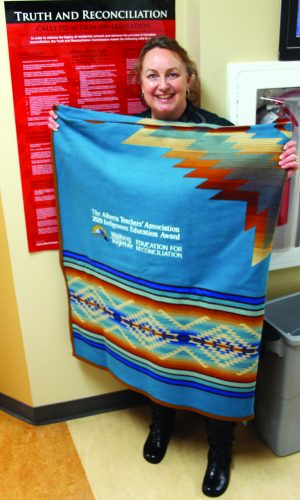 By Rob Vogt Local Press Writer
Monday marked the one-year anniversary of the discovery of potentially unmarked graves at the site of the former Kamloops Residential School site.
The discovery last year brought renewed attention to the history of residential schools.
However, a teacher at Stavely Elementary School was raising awareness years before that and was recently honoured for her efforts.
Julaine Guitton received the 2021 Alberta Teacher Association Provincial Indigenous Education Award for her work on the Project of Heart.
The award was delayed because of the pandemic.
“I was so surprised,” Guitton said upon hearing she won the award. “It was a great honour for me and for those students.”
Back in the 2016-2017 school year, Guitton wore an orange shirt to commemorate the survivors of residential schools. She was the only one.
Now, Orange Shirt Day is held every year to remember the impact of residential schools.
Guitton was also teaching a Grade 5/6 class and wanted to do some problem-based learning in her social studies class.
The students ultimately defined their guiding question as, “How do we find out the truth about residential schools in Canada and make reconciliation with this part of our history?”
After doing some general research, Guitton found out about “Project of Heart”.
She described it as a collaborative journey of learning about residential schools in Canada from those who survived them. It includes general research about residential schools in Canada, then a more narrowed research journey into a specific residential school, including meeting with a residential school survivor, and then finally an artistic act of reconciliation.
The class connected with the Piikani Traditional Knowledge Services centre in Brocket. Through them, students learned about St. Cyprian’s Indian Residential School near Brocket.
They also connected with Betty-Anne Little Wolf, a residential school survivor and Native Liaison Worker, who Guitton had worked with previously.
The students launched the project, where they wrote about their feelings, thoughts and what they learned so far. Students then shared them with an audience that included residential school survivors, members of the Piikani Nation, parents, the superintendent, and school principal.
Little Wolf later visited the students and shared her experiences.
They defined reconciliation as the restoration of friendly relationships. As a class they worked with Georgina Henderson, the school division’s First Nations, Métis and Inuit Success Coordinator, and survivors of St. Cyprian Indian Residential School, to try to learn more and understand the residential school experience.
The students concluded the project by visiting the St. Cyprian Indian Residential School site, where they were guided through the site by Albert Prairie Chicken, a former student who explained more about what it was like to attend St. Cyprian’s Indian Residential School.
As a part of Project of Heart, students had to make and present an item to represent the reconciliation to the survivor who worked with them in the process, in this case Little Wolf.
Guitton said the class opted to paint a large rock from a local field, and place their fingerprints on it to show they were forever changed by this experience, and they are committed to the process of reconciliation. The class decided to take this one step further and each student chose a small rock from their community to paint and leave at the St. Cyprian Residential School site. It was a personal marking of reconciliation.
“It was such an empowering, student-driven activity,” Guitton said reflecting back on the project. “We’ve been having that conversation with our students at Stavely Elementary School since 2016.”
“I feel we have grown so much in our knowledge,” she added. “It’s moving in the right direction.”
“To think residential school knowledge was so unknown at the time,” she continued. “To see that issue become so mainstream.
“I feel so fortunate to have that framework laid for our students and our community.”
Those students are in high school now.
“Those things stay with you as a person,” she said. “I like to think it was empowering for them.”