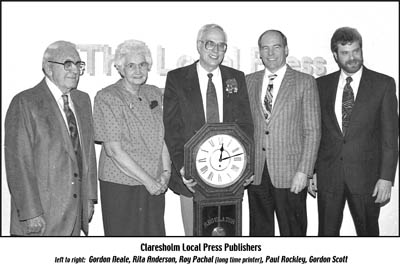 The history of newspapers in Claresholm began in 1904. With the growth of the town, the Claresholm Review was established, with McDonald and Huxable as proprietors and Woodburn McDonald as the editor. The Claresholm Advertiser started publication with its first edition being published on Wednesday, April 15, 1914. By the spring of 1919, both papers had amalgamated to form the Review-Advertiser which ran until the spring of 1928.
However, 18 months prior to that, the first issue of the Claresholm Local Press was printed, in Oct. 1926 with R.L. King as editor and publisher. At the time, the Press was located on 49th Ave. W. In 1928, King bought a lot on Second Street, which is still the present location for the paper. In that year, a cottage roof building, 24 feet by 24 feet was constructed and became the home of the Claresholm Local Press.
King continued as editor until Dec. 21, 1944, when he sold the business to Gordon Neale. In1946, Neale bought the mailing list of the Stavely Advertiser, some 350 names. Both papers were printed in Claresholm in those days.
By 1948, additional space was needed for more equipment, so an extra 24 feet was added to the back of the Local Press building. In 1954, a 10-foot by 48-foot addition was built to the north side of the building for paper stock and to make room for an automatic folder for the paper. A 14 by18-foot office was later built on the south side of the original building. 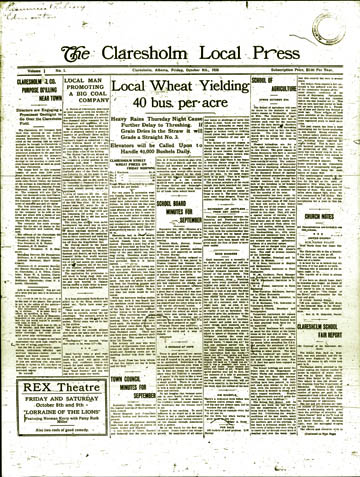 Eldon, “Andy”, G. Anderson bought the paper from Gordon Neale and took possession on Feb. 1, 1965 and was publisher and editor until May, 1978. At the time of the purchase, the paper was still being printed by letterpress, meaning all the type had to be set by hand, linotyped or engraved in lead before it went to the presses. All setting of type and press runs were done in Claresholm except for press ion colour printing.
Both the Claresholm Local Press and the Stavely Advertiser were printed this way in Claresholm.After the last issue of the Stavely Advertiser was printed, the Stavely news was included in the Claresholm paper.
The last paper to be printed in the original building was on July 27, 1972, at which time the present building was built in two stages. The back half was built first. The printing equipment was moved into the new half and while the front half was being constructed, the office was run from the Dr. Morley Hodgson building across the street. The official opening of Cedar Terrace, the current building which now houses the Claresholm Local Press, was held on March 24, 1973.
June 5, 1975, marked a change of history for Claresholm’s newspaper. The electronic age took over from the mechanical working equipment. A computer called Linocomp, with a regular typewriter keyboard of 36- plus keys, was installed replacing the mechanical linotype keyboard of 90 keys.
The Linocomp was a photo-electric computer; the second of its kind in Alberta that set type on photographic paper. The pages were paper paste-ups; negatives developed in a newly built dark room and sent out to be printed on an offset press. New computers were purchased every two years to keep up with the changes in printing.
On April 1, 1978, Paul W. Rockley bought the Claresholm Local Press from E. G. Anderson and was publisher and editor until March 29, 1990. Paul Rockley also bought the Okotoks Western Wheel in June of 1989 and was editor and publisher of both papers, dividing his time between Claresholm and Okotoks, until selling the Local Press in 1990. Rockley, while owning the paper was involved in organizing the Claresholm Christmas Hamper Program, which is still helping many celebrate a happier Christmas to this day.
In 1989, three SE30 computers and a laser writer printer were purchased. EMS Press Ltd. purchased the newspaper on March 30, 1990 with George Meyer and Gordon Scott becoming partners. Gordon Scott took the helm of publisher and editor from March 30, 1990 to April of 2000.

In 1998, Gordon Scott and his staff organized a retirement party to honour Roy Pachal’s long time employment of 45 years at the local newspaper office. Roy, the pressman for the paper, was the longest employee in the newspaper’s history. 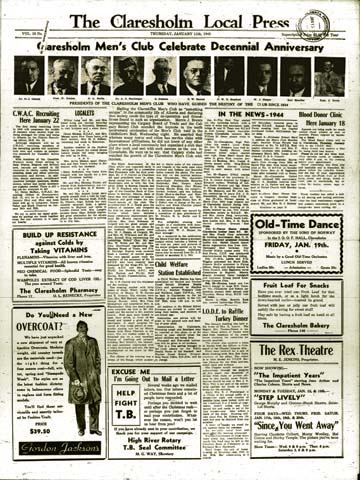 During Gordon Scott’s tenure as editor, the Local Press changed from broadsheet to tabloid format and all pagination was done on computer. Scott also brought in full colour printing to Claresholm by purchasing a laser digital colour printer called a DocuPress. Full colour pictures and posters could now be printed. Gordon Scott passed away suddenly in his home April 4, 2000.
The year 2000 also saw another change. Negatives no longer had to be shot and the paper was sent to press electronically.
From April 2000 until June of 2005, George Meyer became sole owner of the Claresholm Local Press.
Gradually the Local Press moved into the digital age, closing its darkroom finally in 2004, with the purchase of two high-quality digital cameras.
On July 1, 2005 the latest chapter in the Local Press’ long history began when Roxanne Thompson purchased the paper. She has been with the organization 20 years and now serves as publisher, in addition to all the duties of general manager which she has been performing since
2000.
The year 2005 also marked the 100th anniversary of the Town of Claresholm and the Province of Alberta. The Local Press celebrated the occasion by publishing a special 44-page commemorative edition.