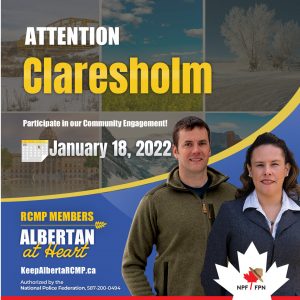 By Rob Vogt, Local Press Writer
The National Police Federation wants to know what your thoughts are on the Alberta government’s proposal to transition from the RCMP to a provincial police service.
The federation is bringing its “Keep Alberta RCMP Campaign” to Claresholm on Jan. 18, where they will be hosting a public consultation at 2 p.m. at a venue yet to be determined.
Kevin Halwa, the Prairie/North Region director for the National Police Federation, said they are meeting with Albertans to provide clear and fact-based information on the potential cost and community safety implications of this proposed transition, and gather feedback from the public.
“We’re hearing what they have to say,” he said.
Halwa noted the federal government currently provides 30 per cent of funding, which equates to about $185 million this year.
However, as costs rise that number will also increase.
If the provincial government moves to a provincial police service, that 30 per cent is gone.
“The difference would have to be picked up by the tax payers of Alberta,” Halwa said.
On top of that, he stressed, there are huge transition costs.
The provincial government recently released a report it commissioned on a transition that estimates between $366 million and $371 million in transition costs, if they stay on budget.
Halwa pointed to the example of Surrey, British Columbia, which is currently in the process of transitioning from the RCMP to a municipal police service.
The initial estimated cost of transition was $19 million. The cost has increased to about $80 million, which works out to a 400 percent increase.
“These transition costs get very large, very, very quickly,” Halwa said.
Moreover, he continued, the report proposed one option that calls for less fully-trained officers than currently exist with the RCMP providing the service.
Another option provides slightly more officers.
“We could easily add those now,” Halwa said of the additional officers, adding it would only be 70 percent of the cost, because the federal government would pick up the other 30 per cent.
“There’s much better ways and much more efficient ways of addressing community concerns without starting over,” Halwa said.
Another part of the federation’s engagement is around continuity of service.
About four years ago the RCMP began to create crime reduction units in the province, meant to target the individuals responsible for crime.
As a result of their efforts, crime in rural areas has gone down about 10 per cent and six per cent in urban areas.
The RCMP has also created partnerships and built bridges with volunteers in communities, with initiatives such as community policing, rural crime watch and much more.
“We’d have to start all over,” Halwa said. He noted it took years to hone those programs.
“It’s not something to be replicated easily,” he said. “Quite frankly it’s offensive to those people (who created those programs).”
Other consultations are being held in Westlock, Athabasca, and Fort McMurray this week, and were in Sherwood Park, St. Albert, Fort Saskatchewan, and Sony Plain last week.
Along with Claresholm, there will also be consultations in Okotoks on Jan. 18; Pincher Creek and Lethbridge on Jan. 19; Medicine Hat and Brooks on Jan. 20; and Strathmore on Jan. 21.
More information is available at https://www.keepalbertarcmp.ca.
Watch the Claresholm Local Press for more details as they become available for the place of the public consultation at 2 p.m. on Jan. 18.

Register for this event here: