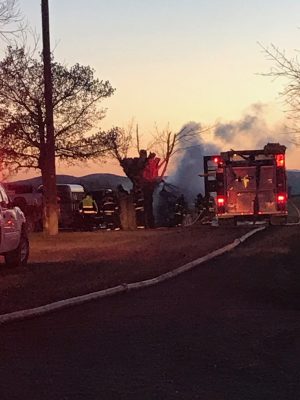 By Rob Vogt, Local Press Writer
Closing a door made all the difference between a house suffering smoke damage and being engulfed in flames.
On Jan. 4, Clay Moss was shopping in Claresholm on the phone with his wife Marika who was at home in Stavely.
The smoke detector went off, and he could hear it through the phone.
Their son came upstairs and said he thought there was a fire, so Marika told him to get out of the house.
She looked in the office of the house and a desk was on fire.
Marika immediately closed the door.
“That saved our house,” Clay said.
When he arrived at the house, it was full of smoke, but everyone was out safe. One son had saved the cat, while the other was with Clay.
Fire crews soon arrived from Stavely.
Clay himself is a firefighter with the Stavely department. He did not fight the fire, but was able to drive the second truck on scene and provided back up.
Clay said the first crew saw that the office door had been closed.
“They said it slowed down the fire,” Clay said. “It literally saved our house.”
Otherwise the fire would have grown faster.
Clay has seen a lot of fires fought in his time as a firefighter.
“This one went pretty well,” he said. “I’m grateful for that.
“They did a really great job.”
Clay noted they did as little damage, and were as considerate with the Moss’ belongings, as possible.
“We are so grateful for that,” he said. “I know how much effort they put in.”
Investigation revealed the fire was caused by an old power bar, whose leads had corroded over time, that Clay had plugged an LED-light lamp into. Because the plug was also loose in the outlet, it led to arcing and melting wires, and the fire started.
By the time the breaker tripped, the desk was already on fire.
It was the smoke detector that signalled there was a problem, so Clay wanted to encourage everyone to check their smoke detectors to make sure they are working.
The whole house was full of toxic smoke, the result of burning plastic in the office.
“All our stuff is saturated in it,” Clay said.
The restoration people are at the house now, and all the contents have been removed. What can be cleaned will be cleaned and whatever needs replacing will be replaced.
Meanwhile, the Moss family will be moving into an Airbnb in Claresholm while their house is restored.
Donations have come in to help with everything from clothing and toys, to toiletries, household items and more.
A disaster and emergency fund in Stavely has provided assistance and a GoFundMe page has started.
“The community has been absolutely amazing,” Clay said. “We are so grateful for everyone.”
He said they have everything they need for the immediate future.
“All the donations have been greatly appreciated,” Clay said.
He also wanted to commend the Municipal District of Willow Creek emergency services and the Stavely, Claresholm and Nanton fire departments as well as the Granum department who were on standby.
“Those crews getting here as fast as thy can made a world of difference,” Clay said.
Insurance is working on the situation but it will take time, and there will still be upfront costs and expenses for the family.
Consequently, if people want to support the GoFundMe campaign, they can.
“This community has made a difficult situation so much easier to deal with by their generosity and caring,” Clay said.