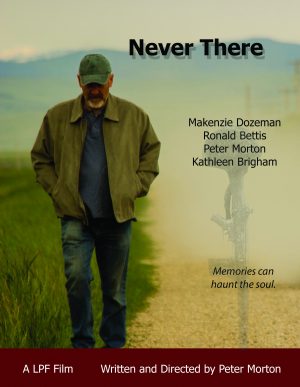 By Rob Vogt, Local Press Writer
Art imitates reality in the latest film by local fillmakr Peter Morton, although in this case the art came first.
The Claresholm filmmaker and his Little Piggy Films recently completed shooting the feature “After” this past year.
It is a post-apocalyptic story where a pandemic wipes out much of the population, spawning civil wars that lead to more death, and the rise of corporations to fight for control.
Morton wrote this story three years ago, long before the current pandemic, so its similarity to current events was not planned.
In fact, Little Piggy Films was halfway through filming when the pandemic started.
“After” is in post-production now, and is intended to be the first in a three-part series.
A trailer, or preview, of the film, as well as a movie poster, have been completed.
The trailer can be seen on the website and Instagram pages of Little Piggy Films.
Morton’s latest project is the film “Never There – The Courier”.
The movie is about a courier in hiding, who is drawn out to face his past and make one last delivery.
It is a sequel, and the second in a series of three “Never There” films.
Auditions were conducted within the COVID-19 health guidelines, and the first read through is set for this weekend, again with health guidelines in mind.
Filming is tentatively due to start the last part of February and the early part of March, depending on the health guidelines.
The initial “Never There” story follows the story of Ashlee Rowntree and her relationship with her grandfather, who was not even aware of her existence. Viewers see how their relationship builds into mutual love and respect, until the demons from the past come back to haunt them both.
It was submitted to film festivals, where the movie made it all the way to the semi-finals of the Austin Film Festival in Texas.
“We got some very good feedback there,” Morton said.
Some of that feedback reflected on the equipment they were using.
There was a suggestion to be more cinemagraphic which was addressed by upgrading equipment.
Little Piggy Films now has three cameras, dollies, gimbles, and a new computer with a far greater capacity.
These upgrades were achieved with the help of investors.
“Never There” was also shown at some independent theatres last year such as the Empress Theatre in Fort Macleod.
“Some very good feedback came from the Fort Macleod screening,” Morton said.
The screening at the Empress far exceeded expectations, attracting about 150 people and garnering a standing ovation at its conclusion.
Anyone interested in seeing “Never There” can watch it in serialized form on the “Little Piggy Films” Instagram page.
The film is in episodes, with the next one dropping on Jan. 15, and every second Wednesday after that.
Little Piggy Films continues to evolve as well.
There is now a permanent sound engineer, cinematographer and social media specialist.
They have hired Tianna Bishoff as an intern who is learning how to use the camera and will likely do some filming. Hannah McQuaid of Stavely has also joined the team.
Anyone interested in more information or viewing trailers and episodes, can visit http://littlepiggyfilms.simplesite.com (no dashes or spaces)