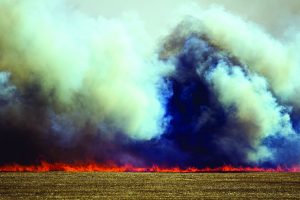 By Rob Vogt, Local Press Writer
The Town of Claresholm will spend just under $5,000 on a radio system so town staff can communicate with emergency services during an emergency.
At its May 25 meeting by video conference, town council was advised by Chief Administrative Officer Marian Carlson that staff had a de-briefing session after the recent wildland grassfire in March.
She noted town staff provided assistance in that emergency, and they discussed communications afterwards.
It was discovered the town office has no radio system to communicate with the RCMP, fire department or ambulance.
Those emergency service providers use the Alberta First Responders Radio Communications System, or AFRRCS.
The matter was presented to the town’s emergency advisory committee who suggested purchasing a portable system that can be moved around to various places in the new building such as council chambers and the meeting room.
The estimated cost was $4,810 and it was recommended that funding come from general reserves.
Council then agreed to approve the out-of-budget expenditure in the amount of $4,810 for the purchase and installation of an AFRRCS radio system for the town’s emergency operations centre, with funding to come from general reserves.