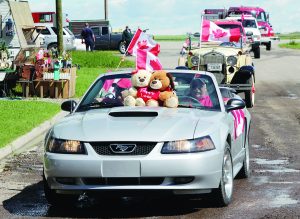 celebrating the nation - Residents in Granum could not be deterred on Canada Day. While all celebrations were cancelled to prevent the spread of the COVID-19 virus, people still hit the streets on July 1 for a parade all through the hamlet featuring vintage vehicles, and representatives from the fire department, RCMP, and Municipal District of Willow Creek. Photo by Lawrence Gleason

By Lawrence Gleason
Local Press Writer
Granum had a Canada Day celebration.
Following a suggestion Granum could hold a Canada Day Parade, even though its usual annual celebrations, including a community cake cutting, games, pancake breakfast, entertainment and fireworks were cancelled due to the COVID-19 crisis, local volunteer Fran Hanson, got into action.
“We had a week to do it,” Hanson said. “But everybody seemed to want to join in.”
Car club members agreed to participate as well as the Granum Fire Department. The Royal Canadian Mounted Police led the parade and a Municipal District of Willow Creek grader festooned with Canadian flags joined in, and it was a parade.
Moe than 30 vehicles in Granum’s Canada Day parade made their way through Granum, attempting to drive by houses on every town street.
Wendy Kennedy sat, masked, in the rear seat of a convertible, holding flags. Rick Brunner drove a antique truck he rescued and restored, and a 50s era Pontiac came all the way from Lethbridge. There were more than 20 classic cars in the parade.