The life and times of Gerald Wesley Reid 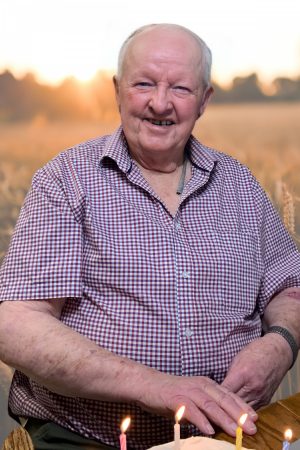 March 4, 1937 – March 4, 2022
Bertha and Wesley Reid were gifted with their son, Gerald, on March 4, 1937, being the oldest of four children – Sally, Wendy, and Rodger (deceased). He was born and raised in Claresholm, where his great-grandparents had homesteaded west of town.
Gerry, not unlike most men of his time, became involved in farming at a young age and continued until his retirement in 2000 at age 63 at the farm east of Claresholm he shared with his wife, Joyce, whom he married on August 11, 1962. In his younger years, he spent leisure time playing pool, bowling, curling, camping, and fishing. Gerry and Joyce travelled many miles together, later on, driving all over Canada and the US, stopping for coffee, and chatting with people along the way.
Though Gerry had retired from farming, the passion remained, and it was reflected in his immaculate acreage – the plentiful fruit and vegetable gardens, as well as the beautiful flower gardens and not a rock was out of place on his driveway. Pride is an understatement when it comes to describing Gerry’s feelings about the farm. Countless hours spent tending to the property with intermittent trips for coffee with long-time friends were the daily life cycle of this retired farmer, bushing to see who would pay for coffee. When he acquired the internet, hours were also spent in his later years on YouTube and, believe it or not, Pinterest. While Gerry took great pride in the acreage and all that came with it, there was nothing he took more pride in than his family.
Gerry and Joyce were blessed with their children, Roger in 1967, and Renae in 1968. Unconditional love would best describe Gerry’s feelings about his family. This love and pride for his family was evident in seeing his relationship with his children – Roger Reid, who currently serves as an MLA for Livingstone Macleod and his daughter, Renae Macey-Reid, a French immersion teacher in Okotoks.
As Gerry grew up surrounded by family, he continued these traditions with many gatherings with extended family and friends. He always went to great lengths to ensure everyone was well taken care of with enough food and drink for an army as well as playing games and having conversations including stories of mischief and teasing that his mom and her sister would get into on their farm. Luckily during holidays and special occasions, Gerry was blessed with having a wife who was an amazing cook, providing delicious meals for all.
Life all changed when Roger married Darleen and Gerry and Joyce were presented with two beautiful step-grandchildren, Aaron and Allison Klaiber, and it wouldn’t be long until a brand new granddaughter, Elisabeth Joyce Reid, arrived. Then fast forward a few years and Renae and Brad welcomed their son, Adam Macey Reid then last but not least, Rylee Macey Reid would arrive, and the takeover of the grandparents’ hearts was complete. Gerry and Joyce had been waiting many years for grandchildren, and he was exactly what one would want and expect of a grandfather – loving, caring, inquisitive, generous, patient and always made time to listen to whatever they had to say all the while giving them the feeling of importance. They were very fortunate to have had him in their lives. His legacy lives on in them.
Gerry followed in his father’s footsteps. Anyone who knew Gerry knew that he had a witty tongue and a smart comment for anyone who would listen, just like his dad. In spite of his health struggles near the end, he maintained his sense of humour, still smiling and teasing his nurses, even telling them his name was Donald Trump.
Having stayed at the farm as long as he could, Gerry died as he lived – on his own terms. Like the snowy white owl who flew gracefully across the field, Gerry went home peacefully on the day of his birth. Bertha and Wesley Reid were gifted with their son, Gerald, once again 85 years later on March 4, 2022.
A special thanks to the Claresholm Fire Department, EMS paramedics, Dr. Leishman, and the amazing staff at the Foothills and Claresholm General Hospital, as well as the Willow Creek Continuing Care Facility.
It’s difficult to summarize what someone meant to so many in so few words. If you have stories to share, please email them to remembergerryreid@gmail.com, as a memory book is being created so future generations can know of his legacy.
Donations in lieu of flowers may be sent in honour of Gerry to Stars Air Ambulance Donations, PO Box 570, Calgary, AB T2E 8M7.
A Celebration of Life will be held at Zentner Funeral Homes on Saturday, March 26, at 11:00 am. Gerry hated wearing suits, so casual attire is welcome (short-sleeved plaid shirts like he always wore are welcome).