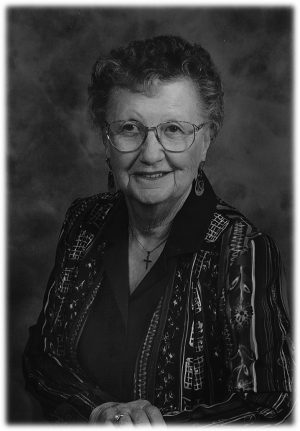 1927 – 2022
Stefia Sims passed away peacefully at the age of 94 years young at Extendicare Fairmont Park surrounded by her daughters, on January 29, 2022. She would’ve been 95 in June.
Mom had a good life. She worked alongside Dad on the family farm near Chaplin, Sask. for many years before they moved to Claresholm, Alta. In 1976. In Claresholm, she worked at the Claresholm Centre for Mental Health & Addictions until her retirement. She volunteered at Christ the King Roman Catholic Church, and that kept her busy until she moved to Lethbridge in 2018.
She is lovingly remembered by her daughters, Elaine, Brenda (Bill), Eileen (Jim), Sharon (Richard), and Gail (Clay); as well as numerous grandchildren; great-grandchildren; brothers Walter (Verna) and Peter as well as other family members and friends.
She was predeceased by husband, Sidney; son, Kenneth; sisters, Jenny and Annie; sister-in-law, Margaret; brothers-in-law, Peter and Johnny; and son-in-law, Gerd.
Stefia’s family would like to thank the staff at Extendicare Fairmont Park for their special care and attention in her final days.
A Funeral Mass and Celebration of Life will be held at Christ the King Roman Catholic Church in Claresholm, Alberta at a later date.
Donations can be made in Stefia’s name to Christ the King Roman Catholic Church. Messages of condolence may be left for the family at www.myalternatives.ca.