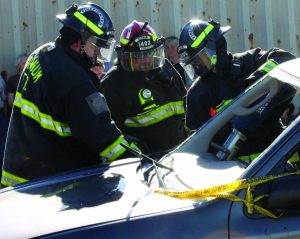 By Rob Vogt Local Press Writer
It is a facility that combines three different services into one facility, and is fittingly called a tri-services building.
The Municipal District of Willow Creek officially opened their new tri-services building on June 22, and used the brand new facility as the spot for the municipality’s annual open house as well.
M.D. councillors were on hand to do an official ribbon cutting while staff, ratepayers, and representatives of neighbouring municipalities looked on.
The building houses the hamlet services, that is the former Town of Granum public works.
It is also used for the M.D.’s transportation services, that is as a grader shed, and houses the Granum volunteer fire department.
M.D. Reeve Maryanne Sandberg said a few words before she officially cut the ribbon, commending the foresight in planning the building.
She explained the project was budgeted for $1.6 million.
“It’s well worth it,” she said.
A total of $100,000 in funding came from the Municipal Stimulus Program, which is a provincial government program to stimulate the economy after the negative effects of the pandemic.
A total of $350,000 came from transitional funding, which is funding the M.D. received when the Town of Granum dissolved into a hamlet in the M.D.
The former grader shed was destroyed in a wind storm, so another $500,000 came from the proceeds of insurance from the damaged building this one replaces.
The remaining funding, $650,000, was borrowed through a debenture.
“We owe (the new building) to some excellent planning,” Sandberg said.
She also extended her thanks and congratulations to the Granum Fire Department for hosting the open house.
“We’re in their house,” she said.
The Granum Fire Department then wrapped up the event with a demonstration of the jaws of life, or vehicle extrication tools, used to rescue passengers from vehicles involved in collisions.