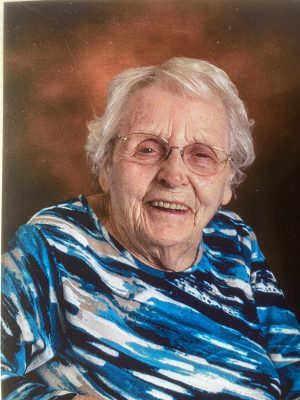 April 23, 1926 – March 13, 2022
It is with much love and special memories that we share the passing with of our dear daughter, sister, wife, mom, aunt, grandma, cousin and friend. Surrounded by the love of her family Doreen passed away peacefully into God’s arms on March 13, 2022, at the Willow Creek Continuing Care Centre where she lived for the past 7 years.
She was so loved by her huge extended family of nurses, doctors and all the support staff. Thank you all for your excellent care, compassion and love for ‘Auntie Dewey.’
Doreen was 95 years of age and would soon have been turning 96. Doreen lived her life guided by her faith in God and by the love from and for her family. Her long and eventful life began in the Foothills west of Nanton where her parents Jim and Madeleine Ryan brought home their new addtion to join the family. She was the third child in a family of six siblings. Doreen began her education in a one-room schoolhouse in the McEwan District west of Nanton. After finishing school she moved to Calgary and was employed by the Calgary Bowness Care Centre. Doreen met and married her first husband Kelly in Michel, BC where they were both employed at the time. Sadly, Kelly lost his life in a work related accident in the early years of their marriage. As time passed, Doreen met her second husband, Jack. Unfortuneatly Jasck passed away unexpectedly due to health reasons after only a few years together. Doreen was blessed with three sons: Doug, Mike, and Jim. Later in life, Doreen met a special friend Harvey and they shared many memorable times together. Doreen worked at various places and jobs during her life, finishing her working career at the Claresholm Care Centre when she retired in 1991. The many people who worked with Doreen over the years spoke highly of her great work ethics and her work evaluations certainly confirmed those comments.
Doreen loved camping, reading, playing cards; she loved the outdoors and the simplicity of life. But one of her greatest pasttimes was walking. She would average 10 miles a day or more and of course, that would include stopping at the local businesses for a coffee, which was one of her trademarks. Doreen was an active member of the Royal Canadian Legion and the Order of the Royal Purple.
Doreen was pre-deceased by her parents Jim and Madeleine Ryan, husbands Kelly and Jack, and special friend Harvey. Beloved sons Doug, Mike and Jim; sisters Pat (Nick) Ewashen, Kate (Walt) Young; brother Bill (Eileen) Ryan; brother-in-law Bert Muir; and many loving and special family members and friends.
Doreen will be lovingly remembered by her sisters Dorothy Muir, and Mert Sandy; daughter-in-laws Debi and Sandy, both residing in the US; as well as 7 grandchildren, 18 great grandchildren and 3 great-great grandchildren, also all residing in the US. Also cherishing her memory are numerous nieces, nephews, cousins and dear friends.
A Celebration of Life will be held on Monday, March 28, 2022 at 11:00 am at Zentner Funeral Homes, Claresholm. Internment will follow at the Nanton Cemetery.
Memorial donations in memory of Doreen may be made to the Salvation Army, Royal Canadian Legion Poppy Fund in support of the Veterans, or charity of one’s choice.
Love the people God gave you because He’s gonna need them back some day.