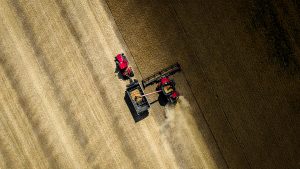 By Rob Vogt – Local Press Writer
It was an above-average harvest for Alberta producers this year.
Alberta Agriculture issued an update on Oct. 27 stating that for more than a century, agriculture has contributed to Alberta’s economic success and identity.
As global events threaten the viability of supply chains and food security, the international community is looking to Alberta to put food on tables and feed a hungry world.
Alberta’s final Crop Report of the 2022 growing season indicated significantly higher yields – about 10 per cent above the five-year average.
Overall, quality for hard red spring wheat, canola and dry peas was above their five-year averages, while durum wheat and oats was lower. Quality for malt and feed barley was on par with the five-year average.
Due to favourable conditions, farmers across the province were two to three weeks ahead in harvest progress for the second straight year.
“Alberta’s producers have faced a number of challenges over the years, but through their hard work and dedication, continue to show the immense value of the agriculture sector and the contributions this industry makes to our economy and communities,” said Nate Horner, Minister of Agriculture and Irrigation.
Soil moisture reserves declined due to dry conditions in late summer and fall. As of Oct. 11, surface soil moisture was rated as 40 per cent poor, 32 per cent fair, 27 per cent good and one per cent excellent.
However, it is anticipated that soil moisture reserves and surface water supplies will build up to an acceptable level before the 2023 growing season.
The Agriculture Financial Services Corporation also continues to provide much-needed business risk management tools to producers facing adverse conditions.
The Alberta Crop Report is developed through a partnership between Alberta Agriculture and Irrigation, Agriculture Financial Services Corporation and the Association of Alberta Agricultural Fieldmen.
The Alberta Crop Reporting Program has delivered timely information on crop production since 1940.