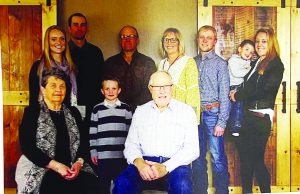 By Frank McTighe Local Press Contributor
A fifth generation Granum-area farm family was among 19 recipients of Farm Family Awards on July 11 at the Calgary Stampede.
The Dunlop family was recognized during an awards ceremony hosted by sponsor BMO at Stampede Park.
The 19 recipient families were treated to a reception and brunch and an afternoon at the Calgary Stampede rodeo.
They also received a personalized gate sign for their farms.
The Dunlop family was nominated as the Municipal District of Willow Creek representative by Coun. John Kroetsch, who attended the awards ceremony.
“The Dunlops were thrilled to be chosen, and very honoured,” Kroetsch said at the July13 council meeting.
BMO recognizes families from every region of Alberta for their exceptional commitment to the agricultural industry and their communities.
“Farm families aren’t just integral to Alberta’s rural economy, they’re a foundational part of our proud agricultural heritage,” Alberta Agriculture Minister Nate Horner said in a news release.
According to the event brochure, the fourth and fifth generations of the Dunlop family are operating the farm and ranch on the original homestead quarter.
Dunlop Ranch Limited is a mixed grain and cattle operation.
The cow herd consisted of Red Angus and Red Simmental cross.
The Dunlops retain home-raised females for replacements and sell additional heifers for breeding as part of their program.
All home-raised calves are backgrounded and then sold.
Cattle work is mainly done with horses to maintain some western tradition.
The Dunlops farm wheat, barley, peas, canola and oats, maintaining a four-year rotation on the main crops.
Crops are seeded using zero tillage practices with some minimum tillage.
All feed is grown on the farm including some irrigated hay and silage. Whenever possible, all straw is put back on the land to further support the soil.
Some custom farming and haying are also part of the faming routine.
The majority of work on the farm and ranch is done by family with help from neighbours during busy times.
“It is important that everyone is involved in both the grain and livestock sides of the operation and it has been a long-time philosophy in the family that including kids in the day-to-day activities is important to the future of the operation,’” the biography reads.
The Dunlop family also plays and coaches hockey, supports school sports as well as the local curling club.
Family members serve with organizations including sports teams, church and the forestry grazing association. Some compete together at ranch rodeos.
For 16 years the Dunlop ranch participated in the Little Royal Pen of Five Heifer show, which helped the breeding female program.
In 2005, the Dunlop family received the Alberta Century Farm and Ranch Award.
“As the family and farm continues to grow, the desire is to keep Dunlop Ranch viable for future generations.”
“Creating the ability to expand the grain side of the operation and increasing yields through innovation, as well as continuous improvements to the cow herd, will set the path for the future.”