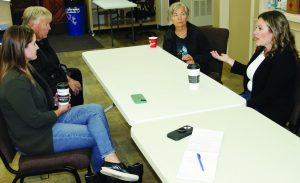 By Rob Vogt Local Press Writer
Rebecca Schulz wants to bring a different style and tone to politics in Alberta.
That is why she is running for the leadership of the United Conservative Party of Alberta. If she wins that she becomes premier of the province as well.
The United Conservative Party hosted a gathering at the Claresholm Seniors’ Drop-in Centre on Monday, July 18, where Schulz introduced herself and asked those in attendance what issues they want addressed by the provincial government.
“I care so much about the future of Alberta,” she said, adding she believes the success of her party is necessary for the future of Alberta.
She said Albertans want a conservative government that brings economic growth.
Her intention is to unite the party and that starts with a strong group of MLAs who she described as “amazing advocates” for their constituents.
Schulz’s first priority is to visit every one of the 87 constituencies in Alberta, so she can hear their perceptions and priorities across the province.
She also wants to be a leader who defends the province and Alberta’s place in Canada.
That will take strong negotiating which she said will mean “less headlines and more results”.
Schulz noted the economy is working well right now, but Albertans want to see a different approach and a different tone to decision-making and how decisions are communicated to the public.
She believes in being a leader with humility, who brings optimism and hope.
“That’s what people are looking for,” Schulz said.
Moreover, she sees what Alberta is and can be from a different perspective.
“I chose Alberta,” she said.
Schulz grew up in a small town in Saskatchewan and moved to Alberta.
“You can be who and whatever you want to be (in Alberta),”she said.
She wants to move away from Conservatives fighting each other, and focusing on fighting the NDP who she said is the enemy because their policies devastated the province.
“We care about people, we care about our province,” Schulz said.
That means an education system that focuses on the student, a responsive health-care system, and communities where people feel safe.
“We have to show we have a vision and a plan,” she said.
As Schulz travels across Alberta, affordability is the number one issue.
To address that, she would re-index non-refundable tax credits, which ends the practice of bracket creep.
According to the Canadian Taxpayers’ Federation that occurs when governments don’t move tax brackets with inflation. Annual inflation bumps taxpayers’ pay into a higher tax bracket even though they can’t actually afford to buy more.
Schulz would also eliminate the small business tax, and provide up to $200 to families to help with the cost of sports, culture and other recreational activities.
Schulz also has a plan for the provincial budget surplus: 35 per cent would go to pay down debt; 35 per cent would go into the Heritage Savings Trust Fund to essentially save for a rainy day; and 30 per cent would address affordability.
She also heard concerns about health care and rural crime.
With health care, she wants to look into accreditation for health-care professionals coming to Alberta from other countries, to address shortages.
With rural crime, she has heard people want to be safe and have more policing resources to feel safe, not a provincial police service. She said if a provincial police service is not a priority for Albertans, it won’t be for her either.
Schulz is the current MLA for Calgary-Shaw, and was minister of children’s services until she had to resign in order to run for the party leadership.
Before that she worked in marketing and communications in education, post-secondary education, and the natural gas industry.
She also worked three years for Brad Wall when he was premier of Saskatchewan, where she learned about fiscally-conservative, pro-growth government that led with honesty, humility, and common sense.
That is what she wants to bring to the United Conservative Party leadership.
“We need somebody who can stay focused,” she said.
Only party members can vote for the leader, and the leadership vote takes place on Oct. 6