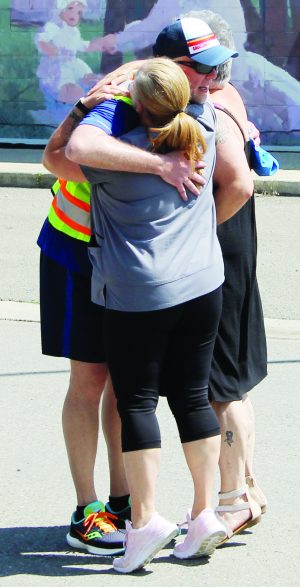 Staring down Highway 520 as it stretched east into the countryside, a small, lone figure gradually came into view, making his way towards Claresholm.
Slowly, the image of Chris Sadleir came into focus, accompanied by his small but determined entourage that included a driver, and his parents who play an important part in the journey.
The date was July 9 and Sadleir was coming to Claresholm as part of his “Walk to Breathe”, a 500-kilometre odyssey from Lethbridge to Edmonton to raise awareness and a goal of $50,000 for lung disease.
Determined to walk 30 kilometres per day, he set out from Lethbridge on July 7 and plans to arrive in Edmonton on July 23 to commemorate a very special occasion.
It will be five years to the day that Sadleir’s father received a life-saving, double lung transplant.
“The inspiration comes from my father – my determination is for all Albertans,” is a mantra Sadleir repeats.
He made his way to Peace Lutheran Church where a small crowd, led by Mayor Doug MacPherson, awaited him to walk with Sadleir the final few blocks to a celebration at downtown Amundsen Park.
They were escorted by Claresholm Fire Department members Dallas Woodman and Lisa Perry in a fire truck until they were called to duty, then Kyle Aikema, the town’s bylaw officer, dutifully stepped in and escorted the walkers the rest of the way.
Sadleir was greeted by his cousins Shannon Thompson and Lisa Martin, and their mother Linda Sherman.
“He’s amazing,” Thompson said. “It is so exciting.”
“His dad should be pretty proud of him,” Martin said.
“He’s got the biggest heart in the world.”
“I hope he can raise the money he wants to,” Thompson added.
Awaiting them in Amundsen Park, were well-wishers, representatives of the Lung Association of Alberta and the Northwest Territories, and the Kinsmen Club of Claresholm with a hot dog lunch.
“We’re very proud of Chris,” said Jennifer Hutchinson of the lung association.
She also worked closely last year with Sadleir on his inaugural walk.
“It really does raise awareness for lung disease,” Hutchinson said, adding it increased fundraising as well.
“It just connected with the community in a different way.”
MacPherson thanked everyone for coming, and dispelled the stigma that lung disease is caused by smoking.
“Lung disease is more prevalent in Alberta than people realize,” he said.
“Smoking is a small part of the cause.”