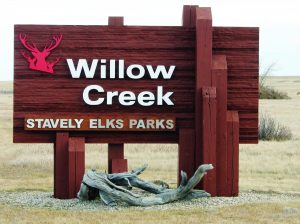 By Rob Vogt
Local Press Writer
By all accounts, the Stavely Elks taking over three Stavely-area parks has been a profitable venture, with all proceeds going straight back into the parks and the community.
Recently, Elks Brian and Tim Nelson toured the three Stavely Elks parks – Willow Creek and Pine Coulee parks west of Stavely; and Clear Lake park east of Stavely.
They explained the Elks took over April 1, and immediately made some changes.
Work bees were held, involving the Elks and Royal Purple Elks.
“The first one we had 65 people the first day,” said Tim Nelson, adding they had about 35 turn out the second day.
Volunteers came from all over, bringing themselves and some even brought their own equipment.
As an example, Brian’s daughter, her husband, and their two children came from Lethbridge.
“They just wanted to be part of it,” he said.
Another example was Tim’s brother-in-law who came from Fairview in northern Alberta. He is not only a member of the Elks, but had several broken ribs and still came down specifically to help out.
Work was done at all the parks.
At Willow Creek and Pine Coulee, trees were trimmed and dead ones removed.
Pine Coulee is the only park with power. A breaker there was continually being blown, and everything was tried to fix the problem.
The Elks called the power company who came out and discovered the problem was the transformer, so they replaced it.
At Clear Lake, the hill south of the hall had never been mowed before, so the Elks mowed it on their own initiative.
A lot of trees had been planted by the Municipal District of Willow Creek, and they have been trimmed and cleaned up.
The Southgates from Nanton were contracted to look after all three parks. They brought a wealth of experience including that of a lodge, in their case the Lions, taking over a park.
Soon, they were selling firewood and delivering it to campers.
When there are families, Elks passed out freezies to the children.
“We’re trying to (appeal to) families,” Tim Nelson said.
The Elks took over the parks from the Municipal District of Willow Creek, but the M.D. still provides support through their equipment, staff and expertise, such as taking in the docks for the season.
“The M.D. has been awesome,” Brian said.
When the Elks took over the parks from the M.D. the parks lost between $125,000 and $150,000 a year.
The Elks have been able to turn a profit on the parks, with the money going back into the community.
“That’s what we do,” Tim said. “We give back.”
Some of the proceeds go back into the parks too.
Tim said when they make a profit they ask how can they make the parks better, and how can they attract more people to the parks.
Currently, they are in the process of running power to the quonset at Willow Creek Park. Volunteers use it to work and some times they work at night, so power will provide the necessary lighting.
They are also looking at investing some money into more trees.
And, the Elks are always looking for ideas. Some that have been presented include a playground, a bandstand, and a blow-up screen that can be used to show a movie in the park.
Taking over the parks has also helped build community within the lodge and outside it.
Tim said it has brought people out to help and, in turn, they have gotten to know each other and built a strong team.
“We want our lodge to survive and thrive,” Brian said. “That makes the community better.”
“It’s all about the community,” Tim added. “It’s that feeling we want to get – that community feel.”
The Elks have had a long association with the parks.
Back in the 1950s, the Elks looked after Willow Creek Park before it was a provincial park.
They also looked after Clear Lake Park before it became an M.D. park.
Now, they are looking after them again. Through it all, the Elks are in it for the long-term.