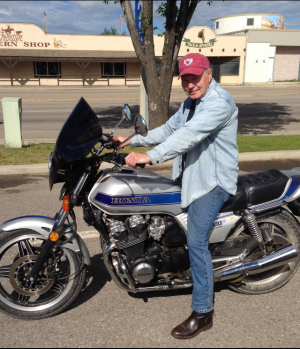 September 11, 1944 – February 25, 2021
It is with great sadness that the family of Roger Kenneth Smedstad announces his passing in Claresholm, Alberta on Sunday, February 25, 2021.
Roger was born in Claresholm on September 11, 1944 to Carl and Anna Smedstad. He remained in Claresholm for his entire life.
Roger ran a home-based business as a signwriter for many years which was a result of his passion for drawing and painting. He also loved building and playing guitars. He spent many years as a member of the band Step’n’stones. They played for many events over the years in the southern Alberta region.
Roger was predeceased by his parents, Anna & Carl; his oldest brother John; his sister-in-law Virginia; and his nephew Norman.
Roger is survived by his remaining brother Dennis (Eldene) of Cranbrook, BC; nephews Michael (Diana) of North Vancouver, BC, Mark (Suzzie) of Invermere, BC and Allen of Calgary, AB; nieces Kristal Simpson of Cranbrook, BC and Kelly (Mike) Holdsworth of Cranbrook, BC; many great nieces and nephews and his friends in the Claresholm area.
Due to Covid-19 restrictions, no service will be held at this time.
Cremation entrusted to Zentner Funeral Homes and condolences for the family may be offered at www.zentnerfuneralhomes.com