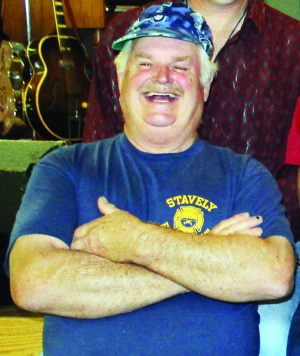 By Rob Vogt, Local Press Writer
A long-time fixture in the Stavely community, who died a few months ago, has been named this year’s Stavely Citizen of the Year.
During the intermission of the Stavely Amateur Rodeo on Aug. 28, Ian Sundquist of the Stavely Elks, announced that Ron Marshall had been named the Stavely Citizen of the Year for 2021.
Sundquist said that, with so many things, the COVID-19 pandemic brought the community to a standstill last year and the award was not given out. The nomination process started again this year and the trustees of the Elks lodge, who look after the award, proceeded with deliberations.
“This year’s recipient was a pillar of our main street and community,” Sundquist said. “He was a member of the Stavely volunteer fire department for years, a member of the Porcupine Hills (Classic) Cruisers, as well as a member of our lodge.
“Stories have been told and are still being told of all the good deeds that he did around town – filling tires; fixing cars and trucks of all sizes, makes, and models – to name a few things (and) also taking old bikes and fixing them and giving them to kids in need.
“The shop door was always open even though he was busy working either on clients’ projects or on his next hot rod. He always took the time to stop what he was doing and help young and old with any project they may have.”
“I know there are a few women in the crowd that could thank him for fixing their vehicles quickly after a fender bender before they went home, so their husbands had no idea,” Sundquist said with a smile. “He took pride in all he did (burnouts included), helped any and all and was a very caring man that always had a smile.”
“Our recipient for citizen of the year award is the very deserving Ronnie Marshall and (the award) is a thank you to him for taking care of Stavely and its residents, surrounding area and passersby for years,” Sundquist concluded.
“They say you never know how much someone means to you until they are gone. This is so true; Ron can never be replaced – he was one of a kind and he lives in our stories of yesterday, today and tomorrow.”
Marshall’s long-time friend Brian Pedersen accepted the award.
“I’d like to thank everybody on behalf of Ron,” he said.