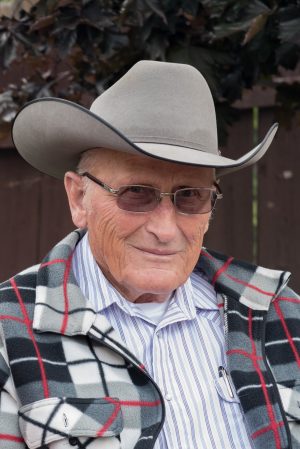 It is with great sadness we announce the passing of Ray at the Claresholm General Hospital on January 13th 2021 at the age 85 after a courageous battle with cancer.
Ray was born in the farmhouse at Paradise Hill, Saskatchewan, oldest of three boys to Joe and Lily Pezderic. As Ray was growing up on the farm his love of horses and animals began. With his horse, greyhound dog and his gun he would hunt for coyotes and rabbits.
At age 17 he went to work on an oil rig at Coleville Saskatchewan. In May of 1959 Ray married Beverly Graham and they moved to Cochrane Alberta where he worked for General Petroleum Oil. Their children Marlin and Marlys were then welcomed into the family in the early 60’s. Later they moved to Claresholm where he got his first taste of working on a ranch for Mr. and Mrs. Joe Bulman in 1962. He loved riding and working with cattle. During his 8 years working on the ranch Ray started team roping, which became a huge part of his life. Ray went on to win many saddles and buckles over the years and also was Canadian Team Roping Champion Heeler in 1976. Ray and Bev purchased his Uncle Tony and Aunt Marge’s farm just northwest of Claresholm where they lived for many years. They then moved to Fort Macleod area for sometime but moved back to the Claresholm area where they still resided during his passing.
Ray leaves to mourn, his wife Bev of 61 years, son Marlin (Denise), daughter Marlys (Sandy) Henry, 5 grandsons Tyler (Leta), Shael (Kirby), Keenan Pezderic, Jordan (Jessie), Darian Henry (Hannah). 5 great grandsons Duke, Ace and Indiana Pezderic, Jensen and Jett Henry.
Also, his brother Lorne (Alma) and many nephew and nieces.
Ray was predeceased by his Mother and Father, Joe and Lily Pezderic, His brother and sister-in-law Gene and Leone Pezderic. Tony and Marge Pezderic, Pat and Mary Murphy, John and Reima Klancher and Marlene Wise, Jack and Irene Graham, Wayne and Corey Graham and Barry Slater.
Memorial donations may be made to Claresholm Palliative Care, Box 2638, Claresholm AB T0L 0T0.