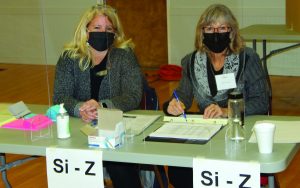 election polls - It takes a lot of people to make a municipal election happen every four years. From left are Karine Keys, who was the chief returning officer for this year’s, and Reta Kerr who worked with her at this station. The election took place on Oct. 20 at the Claresholm Community Centre, with the advance poll taking place on Oct. 14. Photo by Rob Vogt