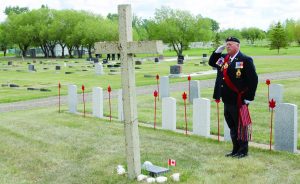 On Sunday, June 6, members of Claresholm Branch No. 41 of the Royal Canadian Legion cleaned and placed Canadian flags on the graves of veterans buried at the Claresholm cemetery. The Legion holds this event every year on the first Sunday of June on or following the anniversary of the D-Day invasion which was June 6, 1944. Here, Brian Thibeau, the Legion’s sergeant-at-arms, plants a flag and salutes. Photo by Rob Vogt