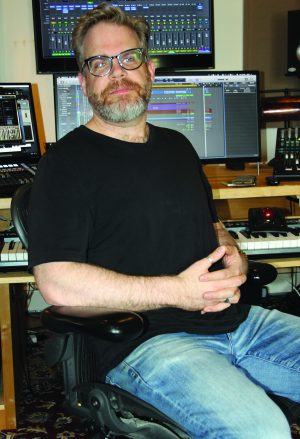 composer - Alec Harrison of Claresholm composes music for TV, movies, and much more. One of his latest projects is the movie “SpiderMable” which dropped on demand in April. Photo by Rob Vogt

By Rob Vogt, Local Press Writer
Alec Harrison was about seven years old when “E.T. the Extra-Terrestrial” sparked an interest in music and storytelling that has led his work to be heard around the world.
That includes “SpiderMable – a real life superhero story” an inspiring Alberta film about a courageous girl battling cancer and raising awareness, which appeared on demand earlier this year.
“There was a moment of ignition when I was about seven,” said the Claresholm composer in a recent interview.
Harrison, who grew up in Okotoks, was watching the 1982 movie that chronicles the adventures of a boy befriending an alien who just wants to get back to his own world. Then a thought hit Harrison – why did everyone care about this creature on screen? It was the music.
“E.T.” was scored by legendary, Oscar-winning composer John Williams whose work includes “Jaws”, “Close Encounters of the Third Kind”, “Superman”, “Home Alone”, “Raiders of the Lost Ark” and much more.
“It became obvious to me the music was the catalyst,” Harrison said.
“It really struck me.”
The music was a big part of why everyone cared about E.T.
The spark of passion was now lit.
“Story telling became very, very interesting to me using music as a vehicle,” Harrison said.
That passion became, as he describes it, an obsession as he became a teenager.
Harrison started to buy and collect equipment. As he got older, he had another revelation.
“You learn there is a craft, a vocation to this,” he said.
He kept practising, took classes, and then his life changed.
Harrison was 21 when he started working as an assistant to composer Bruce Leitl at a studio in Calgary called Six Degrees Music and Sound.
“I’ve been with them ever since,” Harrison said.
Work has never been a roller coaster or sink or swim.
“It has been steady,” Harrison said.
They grow and adapt, but creativity can be a struggle, but Six Degrees has a secret to thir success.
“The team mentality has been a winning formula,” Harrison said.
His work has appeared across the world in coverage of the 2010 and 2014 World Cup of Soccer; Monday Night Football on ESPN; the National Football League Draft; the National Basketball Association draft; and much more.
Harrison has done commercials for Air Canada and Travel Alberta; “FlyOver Canada”, a flying theatre attraction; and the flight simulation ride “FlyOver America” for the Mall of America in Minnesota.
He has been recognized with several Alberta Film and Television, or AMPIA, awards. He has also been nominated for three Emmy awards, which are emblematic of the best television in the United States, for World Cup Soccer in 2010 and 2014, and Monday Night Football.
He has done work on films such as “Inmate #1: The Rise of Danny Trejo” whose music was number one on iTunes in the U.S. at one point.
Harrison has also done a lot of independent feature films with Alberta directors.
One of the most recent ones was “SpiderMable – a real life superhero story”, which dropped this past April and coincided with the Canadian Cancer Society’s Daffodil Month.
It tells the story of Mable Tooke who is battling cancer. The Make A Wish Foundation grants her wish to be a super hero in Edmonton for a day – SpiderMable. The day goes viral, attracting attention across the globe. Mable then uses that attention to become an advocate for cancer awareness.
When the movie opens, one of the first visuals a viewer will see is “Music by Alec Harrison Six Degrees”.
The movie’s director, Kelly Wolfert, reached out to Harrison about music. Then almost two years later to the day, Harrison received an e-mail from Wolfert about this project. That was January of 2020.
“I’ll send you a rough cut, see what you think,” he said. “I need an original score to help thread all of this together.”
So Harrison started writing demos, trying to give them theme and structure.
“It was a big story to tell,” he said.
Harrison said the best description he read about “SpiderMable” was that one day made her famous, it’s what she did after that made her a hero.
“What has she done with that fame?” he said. “That’s the heroism part.”
Harrison finished the music about a year ago, as is the case with most films which take a great deal of time to edit.
Now the movie is available for everyone to enjoy.
Harrison moved to Claresholm with his wife Annalisa and children Emilea and Jude about seven years ago. They were looking for a home in a small town that had space for a studio separate from the house.
They found one in Claresholm that had everything they were looking for, and made the move.
Harrison works from his studio, and has taken on a new role as well – videographer for the Town of Claresholm. He has already put together videos on the new play school, day care, and multi-use community building.
Through it all, whether these videos or his music, Harrison loves what he does for a simple reason.
“I love story,” he said. “I love telling story.”