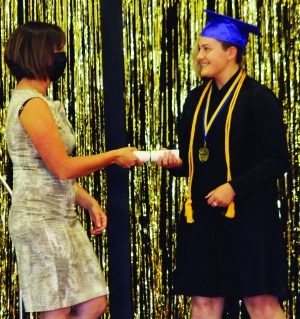 By Rob Vogt, Local Press Writer
Despite all the health restrictions, lockdowns, and setbacks over the past year and a half, the 2021 graduating class of Willow Creek Composite High School beat the odds and held an in-person ceremony so family and friends could celebrate their graduation.
The event, which was not held in-person last year to prevent the spread of the COVID-19 virus, was held on June 25 and looked much different than in past years.
The students were seated in the common area facing toward the gymnasium, six feet apart from each other so they could take their masks off for the ceremony.
Each grad was allotted four tickets and each grad’s four guests were seated together in the gym in a row that was physically distanced from every other row.
A stage was set up at the front of the gym, in front of the bleachers that were folded up, and each grad approached and exited the stage just once. Award winners received their awards at the same time they received their parchments.
Because of the limited capacity for spectators, the graduation was also livestreamed for the entire world to watch.
Megan Slot was this year’s valedictorian.
“Thirteen years together – we made it,” she said.
She remembered back to when they were told they were a bad class.
“That stems from the fact we’re all friends with each other,” Slot said, and that meant no matter how they were separated, everyone always had someone to talk to.
“We turned out fine,” she said.
Moreover, she noted the grads were lucky to be raised in Claresholm especially with the pandemic, where senior year featured the school opening, closing, opening, and lockdown after lockdown.
“Claresholm has been the best,” Slot said. “I can’t imagine growing up anywhere else.”
“I will miss the people,” she later added, as well her classmates, teachers and more.
“High school taught me friendship,” Slot said. “And how to present myself to the world.”
She looked back at FACES, a leadership education program she took before Grade 10, which changed her perspective before starting high school.
“Only you know how you feel,” she said of one of the lessons she learned. “Only we can control what our future holds.”
She thanked the teachers and administration who had a tough ride, conforming to health regulations and keeping people happy at the same time, and for making possible an in-person graduation.
“Having our parents watch us graduate,” she said. “I’m grateful for (that).”
“Congratulations to us the grad class of 2021 – we made it.”
Principal Jackie Kark told the grads she was proud to watch them grow and mature, each enduring their share of struggles.
“You persevered and here you sit today,” she said.
Kark then provided some simple advice.
“Find what you are passionate about and pursue it,” she said.
Success and achieving goals is not a straight line, but ebbs and flows.
“You define what success means to you,” Kark said.
Teacher Tim Bryson brought words of wisdom.
He pointed to everything the students had to deal with through the pandemic.
“You have been amazing,” he said.
Bryson talked about his brother who has a doctorate in chemistry and has been much published in academic circles.
However, he did not finish Grade 13, which was the final year of high school in Ontario back then, until he was 26.
He wanted to take more music classes but the school would not let him, so he delayed finishing high school. Instead, he played in a band and worked in a bar.
But he never lost his curiosity, then something happened.
“He got hooked on science,” Bryson said, and his brother decided he wanted to go to medical school. He did Grade 13 at night, and followed his interests where they led him.
Ultimately, he completed his doctorate and in a field maybe 10 other people studied in.
“Nobody in their right mind was going to predict where he went,” Bryson said.
The point was, Bryson continued that, what a student thinks is certain now, is not.
In 10 years they will never believe where they are. They will rub shoulders with people of different cultures, races, ages and more who will make them wiser and less certain. And they will follow passions they never knew they had.
“I wish you courage in your struggles,” Bryson said. “And all the happiness in the world.”
Several awards were also presented:
Amy Berg Jennings Award
• Katana Ling and Megan Slot.
CUPE (Canadian Union of Public Employees) Local 2133 Award
• Cedie Kohinsky and Hailyn Zimmer.
Ultimate Cobra Award
• Megan Slot.
Most Credit Award
• Silas Oldenkamp, with 185 credits.
Grad Imagine Award
• Katana Ling.
Kaye Fisher Memorial Scholarship
• Sarah O’Handley.
Lucy Clifton Scholarship
• Sebastian DeDominicis.
Honour grads
• Megan Slot; Cade Patterson; Mardi Kitchen; Katana Ling; Kyle Vogelaar; Tristan Lane; Cedie Kohinsky; Bailey Koevort; Dhillon Schmirler; Colton Symens; Samantha Lybbert; Teagen Gustman; Sarah O’Handley; Silas Oldenkamp; Stephanie King; Brenndon Mackin; and Mason Brussee. 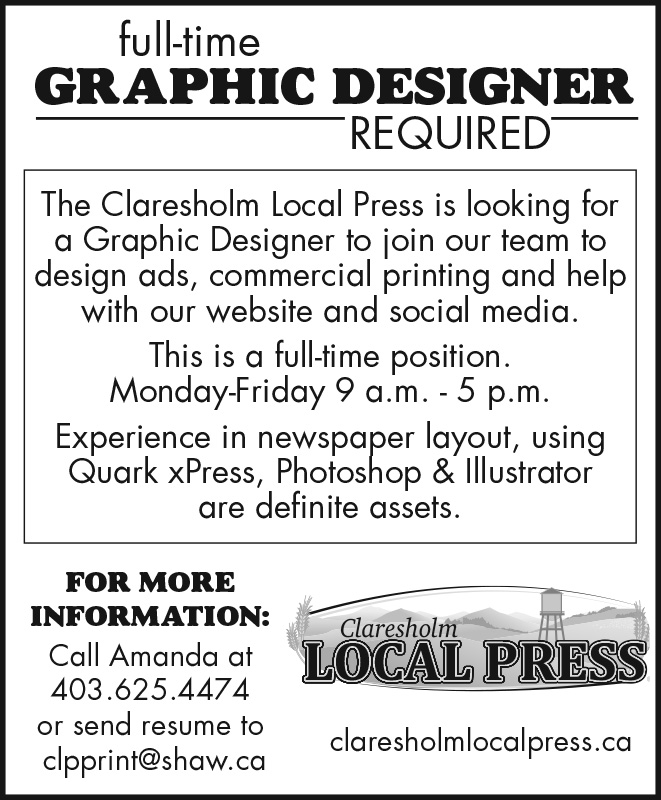