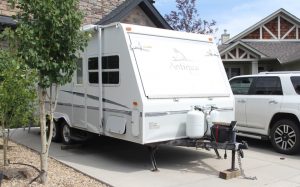 By Rob Vogt, Local Press Writer
Claresholm town council will continue to monitor the situation surrounding new guidelines around recreational vehicle parking which take effect in October.
At its March 22 meeting via video conference, council discussed the public’s response to new guidelines.
Those guidelines state no person shall keep or permit on any residential development or property any recreational vehicle unless the recreational vehicle is parked during the months of May to September inclusive, in a front yard or a secondary front yard and located on a hard-surfaced, gravel, or rock parking area with a setback of at least one metre from the sidewalk or curb if there is no sidewalk abutting the road; and at any time during the year, in a rear yard or side yard and maintained to prevent the tracking of mud or debris onto adjacent roadways.
Chief Administrative Officer Marian Carlson discussed a letter submitted by David and Shannon Yates who are concerned they invested in their property to store their RV according to the town’s guidelines.
They are concerned they are now unable to store their RV, and will incur more expense to abide by the new guidelines to be able to do so.
They also asked if there could be a process to grandfather in properties of those who did make the investment to appropriately store their RVs.
Carlson said the town has been keeping track of the calls since the new guidelines were passed.
There have been 11 calls, with seven against the new bylaw, two asking questions, and two in favour of the bylaw.
Coun. Mike Cutler said he was glad a record was being kept of the calls.
“I appreciate people bringing their concerns forward,” he added.
“It’s understandable that some citizens will have some concerns,” said Coun. Kieth Carlson, adding the town did have requests to enact these changes which are similar to other communities.
Cutler said a lot of this issue is educating the public as to why the bylaw was enacted.
Mayor Doug MacPherson said this would have been a good topic if the town could have an open house. Until then, administration is logging comments and how many people are affected.
He also supported education, noting some people have said RVs are not allowed at all, and the changes were designed to get trailers off driveways. This is not the case, and the guidelines are part of a large number of changes to address unsightly premises.
Coun. Lise Schulze asked if there is room for citizens like the Yates who have done what they can.
CAO Carlson said the bylaw can always be amended by council.
MacPherson said it is a little early to amend the bylaw, because they have until October, and they can still track calls.
Coun. Craig Zimmer said he had two people approach him and both were fine with the changes.
Schulze asked how can the Yates’ letter be addressed?
MacPherson said it would be a knee-jerk reaction to change the bylaw now, but instead discuss it again in six to eight weeks.
In the meantime, CAO Carlson said the town could go to the Yates’ property and see what changes can be made.