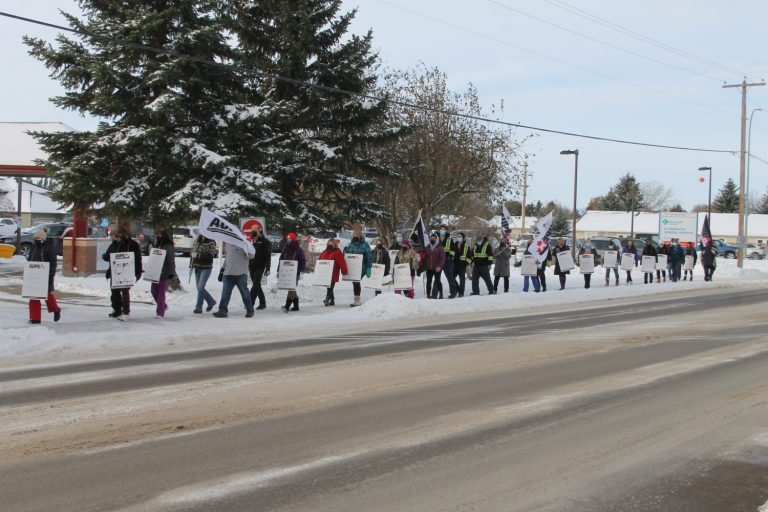 By Rob Vogt, Local Press Writer
Health-care workers hit the streets on Monday morning, walking off the job at the Claresholm General Hospital, Willow Creek Continuing Care Centre and Claresholm Centre for Mental Health and Addictions.
“We are on strike,” said Loree Preete, chair of Alberta Union of Provincial Employees Local 52, South Zone, General Support Services.
She represents members working in food services, laundry, housekeeping, maintenance, recreation, administrative support, and more.
The wildcat strikes started Monday morning in northern Alberta.
“It was just a trickle effect when people started going (on strike),” Preete said. “It was time to pull together.”
They were protesting the provincial government’s intention to reduce expenditures, contract out services, and reduce staff.
“It’s the cuts, the privatization, the cut in services,” Preete said.”We’ll go until our needs are met.”
She added Alberta is the only province that is making cuts and laying off staff during the pandemic, when they should strengthening health-care staff.
“It’s a slap in the face,” Preete said, adding the message from the government is clear.
“Once it (the pandemic) is done, you’re done, a thousand of us.”
Alberta Health Services issued a statement that it “is responding quickly to illegal strike action by Alberta Union of Provincial Employees staff at various sites across the province.
“We are doing all we can to address any interruptions to patient care caused by this illegal job action. Our focus is on ensuring patients continue to receive the care and treatment they need.
“AHS is enacting contingency plans to redeploy non-union staff, including managers, wherever possible to cover for missing staff. AHS is monitoring the situation closely to try to mitigate patient care interruptions.
“However, as a direct result of this illegal job action, some surgeries and ambulatory care clinics are being postponed. Patients will be contacted directly if their appointments are affected. Visitors may be limited at some sites depending on the level of strike action.
“We have reached out to staff to ask them to return to work and end the illegal strike. AHS has made an application to the Labour Relations Board today to formally ask the board to direct the affected employees back to work.
“All AHS sites remain open.”
Karen Weiers, is vice-president of the Alberta Union of Provincial Employees.
“Our members are on strike to save their jobs and stop the privatization of health care,” she said. “Their jobs are on the line.”
The strikes are also intended to bring attention to the need to resolve what she describes as the crisis of short staffing in health care in Alberta.
“They’re being pushed to the breaking point,” Weiers said.
She went on to say the biggest concern is that no one’s job is safe after the health minister announced 11,000 frontline health-care jobs would be cut.
“This announcement was reckless and provocative,” Weiers said.
Consequently, she said AUPE will not be complicit in watching layoffs and privatization.
“That’s why our members are standing up,” she said. “These members are standing up for their jobs.”
Weiers also disagreed with cutting workers during a pandemic. These are the same people who are going to work to help people, and even risking contracting COVID-19 themselves, potentially spreading it to their families.
“Now they have the concern of not having their jobs at the end of this,” she said. “It’s just horrendous.”
Late on Monday night Alberta Health Services issued another statement following a decision by the Alberta Labour Relations Board.
“AUPE has been ordered to cease and desist all illegal strike activity,” it said. “We expect staff members to return to work as scheduled.”