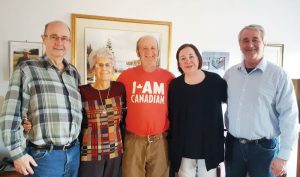 family reunion - Claresholm's Terry Mahoney, adopted at nine days old, has reunited with his birth family, including his 92-year-old mother. At far left is Mahoney with his birth mother; two brothers; and sister.

Terry Mahoney knew it the minute he stepped off the plane in Prince Edward Island and saw one of the people picking him up.

The resemblance was unmistakable.

It was his birth brother Barry Martin.

From there, Mahoney would meet in person his birth mother, Dickie Martin, alive and well at 92, and the family he never knew he had until recently.

Mahoney, who came to Claresholm about five years ago, said he was adopted nine days after he was born by a really good family in Thunder Bay.

“My adopted father is the best man I’ve known in my life,” Mahoney said.

He never bothered to look for his birth mother out of respect for that family.

Then, about 15 years ago, when he was still in Ontario, someone who worked for Mahoney suggested he look for his birth mother.

That changed about three years ago.

Now, if someone who was adopted writes the government, they will share everything they have.

“They sent me back my birth certificate,” he said.

From there he began searching, starting with Ancestry.ca.

His mother’s name was Lucinda McInnis, but he found her married name.

One night, at about 3 a.m., he was awakened by a poke from his wife.

She had discovered something on the Internet.

“It was my brother’s obituary,” Mahoney said. “We were very similar.”

There on the screen was his mother’s name – Dickie Martin.

They found a phone number for one of his brothers, but got voicemail.

At the back of Mahoney’s mind was the experience of that person who worked for him back in Ontario.

“My wife had no such qualms,” Mahoney said with a smile.

One night his wife called that number again, and very gently talked to Mahoney’s brother.

“Maybe you and my husband are related,” she said, while asking him not to hang up.

That brother lived in a granny suite with his mother, so he walked across the hall and asked her if she wanted to act on this.

She said yes and gave her number out.

Dickie Martin was 92 at the time when Mahoney called her.

“I think you might be my mother,” he said.

The next day a brother and his sister called. When they saw their mom, she asked if what happened was real or a dream.

Mahoney thought he better get there as soon as he could.

“My wife was the driver,” he said, adding she knew his mother wanted to see him.

It turns out Mahoney was given up for adoption in January. His mother was Catholic and his father was Protestant, which was a no-no in Prince Edward Island.

Yet, they overcame that and were married in November, not even a year after the adoption.

But there was nothing they could do now.

Mahoney was given up for adoption in Thunder Bay. He had been born in Stratford, PEI and his mother went from there to Thunder Bay and stayed with her sister.

It turns out that same sister, Mahoney’s birth aunt, lived three blocks from where Mahoney grew up in Thunder Bay.

Mahoney made his first trip to the Maritimes a week after he re-connected with his family, hopping on the first affordable flight there.

His mother wanted that too.

“She needed more than just a phone call,” Mahoney said.

One of his brothers was warned by one of his children that maybe this was all a scam.

Then they pulled up a photo of Mahoney off the Internet.

“No that’s him,” the brother said.

Again, the resemblance was unmistakable.

Another brother, Clayton Martin, had died four years earlier, and he too looked like his brother.

Mahoney also saw a picture of his dad at the age of 22 or 23 in the airforce during the Second World War.

“He’s the spitting image of me,” Mahoney said.

His brother Barry was there to pick him up.

When he came off the plane, the recognition was instant.

“We just knew who we were,” Mahoney said.

If that wasn’t proof enough, the morning after he arrived, Mahoney awoke and dressed himself. When he saw his brother Barry, they were wearing similar green flannel shirts and jeans.

What followed was meeting his sister Debbie, the only girl in the family. It turned out he had three brothers, two still living, and that sister.

“It’s unbelievable how similar we are,” he said. “The sense of humour, everything.”

“There was a lot of tears, a lot of laughter,” Mahoney later added.

The second trip to the Maritimes included a party.

“What it turned out to be was a baby shower for my mother,” Mahoney smiled.

They celebrated, proclaiming, “Congratulations, it’s a boy” and noting he was 70.5 inches and 185 pounds.

In two hours, 76 people came to that gathering in Stratford, PEI.

Most were relatives, but a lot were friends. The Martins were exceptional people, who helped everyone they could.

He discovered more living relatives, including one uncle who is 87, and three aunts one of whom is 97.

He also found out his health information, and things he has in common with his birth family.

“I was welcomed wholly and completely with no reservations,” Mahoney said. “I’m a brother, that’s that.”

He has now been back to the Maritimes four times since re-connecting.

Up to the reunion, it had been a tough five years, as Dickie Martin lost her husband, a son, and a son-in-law.

But now she found a son, and revealed something.

“The ache is gone,” Mahoney said. “She was happy again.”