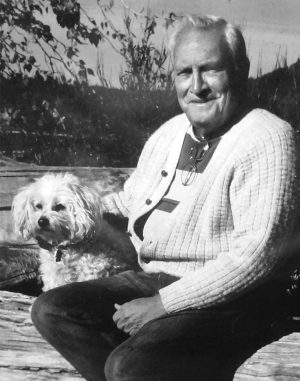 After 94 years of life, Don fell asleep in Christ in the early morning of Saturday, September 28, 2019. He was born at the Scottish Nursing Home in Calgary, Alberta on April 9th, 1925 and has lived in Claresholm all his life.

Other than leaving home for university, Don spent his entire life in Claresholm. He grew up in the corner house – #228 on 47th Ave. and 3rd street. The Clark family had a barn behind the house where Don had 2 horses – Lady and Frisky. He rode with friends many times out west and even to the SN ranch with his pals Ray Milnes and Bill Brown. He told us they used to get good pie at the SN from the cook, so it made the long journey very worth while. The SN belonged to the T.C.Milnes at that time and little did he know that his daughter Sherry would be married to the owner-(Charlie Ewing) of this ranch one day! He also loved motorcycles and had a BMW – he and Ray, who had a Harley, were perhaps the older generation of “bikers”. After he married Shirley in 1950, they moved back to Claresholm from university town, Edmonton, and built a new house down the street from the old homestead. It is #380 – 47th Ave. W. They resided there until recently when they moved into the Cottonwood and subsequently to Willow Creek Continuing Care Centre. They turned this house into a lovely home for their 2 girls and it always seemed like they had an open door policy for friends and neighbours any time of the day who always got a cup of coffee and a homemade sweet with a good chat and lots of laughs.

Don graduated in 1953 from the University of Alberta in Edmonton with a DDS (Doctor of Dental Surgery) degree receiving top honours, winning the gold medal for his class. This was the first time in many years it was given for excellence in workmanship. He then bought out Dr. Falkner of Fort McLeod, who at the time also had another practice in Claresholm. It was in the same building where the Claresholm Agencies now is located. In the sixties, Don and Sid Cornish became business partners and built a new medical/dental office across the street. He had the practice for 39 years and retired from dentistry in 1992. Don loved his town and helped make it better for the citizens who lived here. He was a councillor for several years, serving on the cemetery department, recreation department – bringing the first rec. director to Claresholm, updating the sewer and water department, and was the instigator in developing the Centennial Park Campground 1 block south of their home. More streets got pavement as well during his tenure!

Don had many fun hobbies too. These included farming, taking home movies with his 8mm movie camera- especially of the girls first day of school – every year! He loved to fly airplanes and was a member of the Claresholm Flying Club. He also built and flew his model airplanes. Don had a passion for the stars being so thrilled to identify the planets through his telescopes. Gardening, travelling the world, taking as many pictures as they could, then organizing their slides into presentations to show at camera club and other venues, which he belonged to for many years. He adored boating and toured several BC lakes camping along the way for many summers. They finally settled on Cummings Resort, Kootenay Lake where they pitched their tent staying there for 61 years. He loved to water ski, and even celebrated his 80th birthday up on skis!!! He also fished and did catch Mr. Big once. Shirley also caught Mr. Bigger which made her giggle with such delight every time the story was told. When he was in his late forties, he learned to snow ski trusting his son-in-law implicitly to teach him. He rode the chair to the top of the mountain at Panorama and when he got to the top (a feat in and of itself for the first time) and looked down, his eyes became huge with fright! He was always a good sport and did eventually make it to the bottom where we all celebrated his accomplishment with an Irish Coffee! In his later years he became a member of the Lethbridge Bonsai club, loved to curl, and recently was a board member for the Claresholm museum.

Don had a full life and very blessed. He was always happy and had a mischievous little smile. He was kind, patient and wise being the ultimate perfectionist in everything he did.

Don’s family invite you to attend his funeral at Willow Creek Funeral Home, Claresholm Alberta, October 26th at 1:00pm. Bro. Steve Hracs will be taking the service. In lieu of flowers please make donations to Pampered Pets – Box 1426, Claresholm, AB T0L 0T0 Condolences may be forwarded to the family at www.willowcreekfuneralhome.com