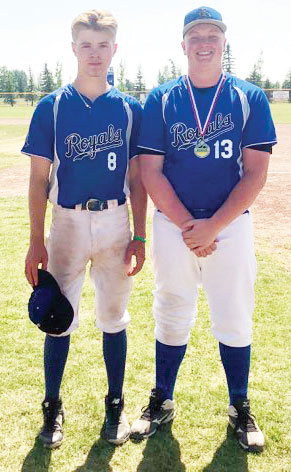 gold medallists - The Fort Macleod Junior Royals won their fourth straight provincial championship on the weekend, with a healthy contingent from Claresholm on the team. From left are Sean Burns and Terril Orsten. Photo submitted

The Fort Macleod Junior Royals, which includes a strong contingent from Claresholm, won their fourth straight provincial championship this past weekend.

Local players on the team are Sean Burns and Terril Orsten.

The team is made up of  players from towns across Southern Alberta including Claresholm.

The Royals won the final by defeating the Fort Saskatchewan Red Sox 9-1.

This is Burns’ fourth provincial gold medal in a row, and Orsten’s second.