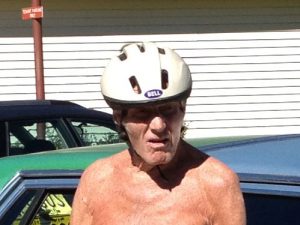 Born and raised by Harold and Nina de Forest on a ranch near the Porcupine Hills southwest of Claresholm Alberta, Ron was initially home schooled, then attended middle school in Granum, Alberta and high school in Medicine Hat, Alberta. Ron’s first and primary career was that of a ranch hand, working the family ranch and later for neighbouring ranchers. In the fifties he got itchy feet and did some touring via motorcycle in Canada and the US, eventually homesteading near Pouce Coupe southeast of Dawson Creek BC. It was the mid sixties when he discovered Cranbrook and the West Kootenays and in 1971 found his home for the next 47 years in Kaslo. In kaslo Ron worked a variety of occupations including driving the community bus from Nelson to Argenta return, working in the sawmill. Much of his work was labour intensive, that combined with running, cycling and weight training kept him very fit for most of his life. Ron’s faith was important to him and for many years he was active in the Nelson/Balfour Christian Science Church.
Some of Ron’s favourite things were; humour, sun(and lots of it), his 82 Crown Victoria, green paint and duct tape.
Ron was predeceased by his parents, and siblings Barbara Watson, Bernice Bernard, Gwen Schultz, and Cecile Hanna, and survived by nieces Belle Parkinson of Vancouver, Grace Williams (ED) Calgary and nephew Norm Hanna of Red Deer.
A celebration of Ron’s life will be held on August 17th, Friday at St Andrews United Church in Kaslo at 2:30 PM. In lieu of flowers please donate to the charity of your choice or Ron’s favourite charity, the SPCA.