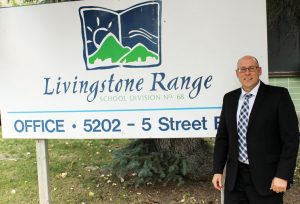 By Rob Vogt, Local Press Writer
The Livingstone Range School Division has hired someone with a 12-year history in the division to be its acting superintendent for the 2017-2018 school year.
Darryl Seguin was appointed to the position effective Oct. 1, with the departure of Dave Driscoll who is leaving to become superintendent for the neighbouring Palliser Regional School Division.
“I was very honoured,” he said, upon hearing the news of his appointment.
He pointed out he has been with Livingstone Range for 12 years.
“It’s always been a great place to work,” he said. “We have fantastic staff throughout the division.
“The communities I’ve worked with have been fantastic.”
Seguin grew up in Sparwood and earned his education degree from the University of Lethbridge. He also got his master’s from the U of L in 2003.
His first teaching job was a two-year stint in Northern Alberta at Little Red River Cree Nation near High Level.
A year on the Blood Reserve followed where he worked at Tatsikiisaapo’p Middle School when it opened.
From there he spent three years in Rimbey then six at Crestomere School, where he was assistant principal at the Kindergarten to Grade 9 school for three years, and three more as principal.
Then in 2005, Seguin came south to become principal at G.R. Davis School in Fort Macleod where he stayed five years, followed by two years as principal at Willow Creek Composite High School.
In 2012 he was named associate superintendent for administration services, and the following year added deputy superintendent to his title.
His most recent accomplishment is earning a human resource management certificate through the University of Calgary.
“My goal has always been how can I make this a better place for kids,” he said.
Seguin saw that in administration, where he has aspired to leave every place he has worked better than when he arrived.