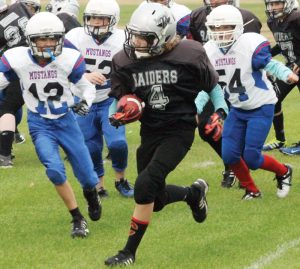 running hard - Andrew Meek, in black, of the Claresholm Peewee Raiders football team, is pursued by a herd of Pincher Creek Mustangs in a game at the Willow Creek Composite High School field on Sept. 13. Photo by Rob Vogt

The Claresholm Peewee Raiders football team got off to a great start, winning their home opener under the lights last week.

The Raiders hosted the Pincher Creek Mustangs on Wednesday, Sept. 13, winning by a score of 27-0.

Claresholm used a variety of runners throughout the game.

On their opening drive Cheyenne Symens ran the ball eight yards; Nate Wright ran it 14 yards; Andrew Meek took it 12 yards; Wright ran another 14 yards; and Sierra Perry capped off the scoring drive with a five-yard run for a touchdown to make the score 6-0.

Wright then added the convert to up the score to 7-0.

Late in the first quarter Jaxon Auld would recover a Mustang fumble setting up the Raiders with great field position.

Wright took it from there, running 38 yards for the touchdown making the score 13-0. Elliot Penner then kicked the two-point convert to make the score 15-0.

Before the half ended, Claresholm got the ball after Pincher Creek turned it over on downs and Ty Ferguson ran 28 yards; Tyce DeJong ran five yards; and Kyler Mazerolle ran seven yards for the touchdown and a 21-0 lead at halftime.

The only scoring of the second half came off an 98-yard touchdown run by Wright in the fourth quarter to make the final score 27-0.