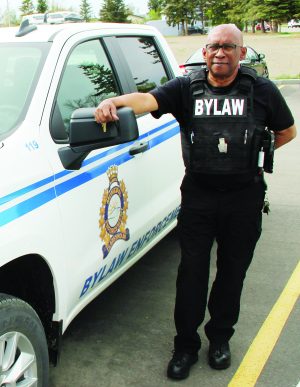 By Rob Vogt, Local Press Writer
The new bylaw officer for the Town of Clareshom brings a wide range of experience to his new job.
Brian Webber started his job on May 9, taking over from Kyle Aikema who had been the bylaw officer.
“It’s been good,” Webber said of his first few weeks on the job, adding he is busy getting to know the community.
Born in Trindad, Webber moved to Ontario where he became a Canadian citizen in 1967, and finished high school and college as well.
He came west in the boom of 1981, settling in Calgary where he worked for Calgary Transit from 1981 to 1992.
Then it was time for a career change, so he became a blackjack dealer.
First he worked during the Calgary Stampede, then got on full time in a casino.
He went back to Ontario as charity casinos were getting going then, later returning to Calgary where he worked his way up to games manager.
He then moved onto the Calgary Parking Authority where he worked until taking his new job with the Town of Claresholm.
Webber found out about the job from a friend in Claresholm.
He had visited the town before, and was looking for a change, so he sent in a resumé, got called for an interview and was offered the job.
“I’m quite happy here,” Webber said. “Just great people.”
He also appreciates the town office and staff who have been helpful and provided any assistance he needs.
“The atmosphere in here is great,” Webber said. “I just love it.”
His goal in the job is simple.
“(I want to) get to know people, help people as much as I can,” he said. “(And) helping the town in any way I can.”
Webber is looking forward to meeting people and getting to know the community.
“I want people to trust me, (so) they can approach me,” he said. “If I can help, I will.”