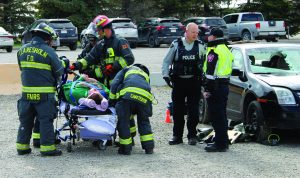 By Rob Vogt Local Press Writer
Lights and sirens filled the air, responding to a two-vehicle collision in the parking lot at Willow Creek Composite High School.
Arriving on scene, police, fire department, bylaw and ambulance personnel discovered one occupant was ejected and dead on scene. Others had to be extricated by the fire department, and one was taken away by police in handcuffs – to face charges of impaired operation of a motor vehicle and much worse.
Eventually, the funeral home arrived to take away the deceased, after loading her into a body bag.
Through it all, Grade 10 students watched, and were taken through every step of the way by members of the police, fire department, bylaw and EMS.
It was all part of a mock collision simulation put on Friday, May 13, to show students the consequences of impaired driving, and send that message home just in time to be ready for the May long weekend.
In addition to all the trauma caused by the impaired driving collision, Mike Cutler, a nurse who works at the mental health clinic, said there are other effects as he pointed to the first responders.
“They’re all taking this home,” he said.
Cutler was referring to the trauma the first responders all witnessed and experienced, all because someone chose to drive impaired. They will take it home to their own families and friends.
“Your one choice can affect hundreds of people,” he said.
“This is real,” he later said. “It affects everybody in this community – by one stupid choice.”
Corporal Dalyn Orsten of the Claresholm RCMP said the driver will go to court, be tried, and have a criminal record forever. She will have a licence prohibition too.
Meanwhile, Orsten and the other first responders will go home to their families.
His wife is a teacher at West Meadow Elementary school, and taught many of the students in attendance.
“Do you think this would affect her,” he said of the collision, adding they try to move on and live their lives.
Malcolm Carlson was one of the students participating in the mock collision. He was extricated from a vehicle by the jaws of life and was loaded onto a stretcher and into an ambulance.
“It was rough,” he said. “I couldn’t imagine having to do that.
“I wouldn’t want to do it again.”
Orsten then summed up the reason for the simulation.
“If we can stop you guys from making one bad decision,” he said. “That’s the point of all of this.”
(Please see related story on previous page)