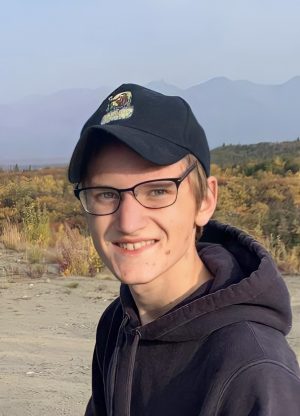 Our beloved son, Aden Lunn, unexpectedly passed away on April 16, 2022 at the age of 18.
He is survived by those who loved him most, including his parents Nathan and Sarah Lunn, and Todd and Carrie (Smrcka) Tosoni, as well as his siblings Reece, Campbell, Denali, Sandia, and Bowie. He was also survived by his loving grandparents Don and Yvonne Lunn and Irma Smrcka, and his aunts and uncles.
Those who knew Aden knew of his captivating personality, his unique outlook on life, and his courage to march to the beat of his own drum. When you met him, you might have mistaken him for the shy, quiet type, but he had a magnetic quality that drew others towards him. He was smart as a whip and had a sly wit that often made those around him laugh out loud.
Aden was born in Missoula, Montana and moved to Alaska with his family at the age of three. He was always happiest when he was outdoors and enjoyed hiking and spending time in the mountains. Aden attended the Alaska Military Youth Academy in 2020 and was proud to be named Valedictorian of his class. He went on to attend Medicine Hat College in Medicine Hat, Alberta.
The family is planning a private family service to honour Aden for the life he lived that was taken too soon.