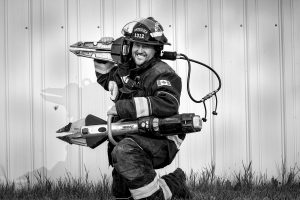 By Rob Vogt Local Press Writer
Virtually anyone who knows Scott Besse will tell you he would be first in line to help someone in need. Now the community has the chance in turn to help the volunteer firefighter and M.D. grader operator. He was recently injured in a vehicle rollover and is recovering at the Foothills Hospital in Calgary.
In response, the Claresholm Fire Department and Willow Creek Emergency Medical Services are hosting a fundraising hockey game between themselves and the Claresholm Under-18 Thunder hockey team on Saturday, March 10 at the Claresholm Arena.
Neil Schuler is one of the organizers of the event. He explained Besse was involved in that vehicle rollover east of Granum on Feb. 20.
Claresholm EMS, Fort Macleod EMS, the Granum and Fort Macleod fire departments, and Fort Macleod RCMP also responded, and Schuler wants to give them a shout-out.
“We appreciated all the support,” he said, adding they appreciated everyone who helped.
Besse was taken to the Foothills Medical Centre Intensive Care Unit facing several challenges and deficits to his lower extremities..
He has since been transferred to the Foothills Medical Centre Spinal Rehabilitation Unit for a prolonged stay where he started one to two sessions a day with a physiotherapist.
“We’re all hoping all the best for him,” Schuler said. “We’re hoping he walks out of the Foothills Hospital because we haven’t been told he can’t.”
There will be significant expenses not covered by health care for Besse and his wife Krista Minish, so Willow Creek Emergency Medical Services, the Claresholm Fire Department and close friends are putting on a hockey benefit against the Under-18 Thunder.
Schuler said they appreciate the Thunder’s support, adding the game is also one last chance for family and friends to see the boys play.
Admission for the event is by donation at the front.
There will be a silent auction in the arena mezzanine all night, and a live auction conducted by Allan Minor in the second intermission. It will feature a bundle of exciting items.
“We’ve had a massive outpouring of support from the community,” Schuler said.
Beef on a bun will also be available. Doors will open at 6:30 p.m. with the puck dropping to start the game at 7:30 p.m.
“All proceeds are going to Scott and Krista’s time in need,” Schuler said.
He noted both are active members of the community. Minish, a veterinarian, is great with animals, while Besse is a fun, out-going, dedicated member of the community who has been a lieutenant in the fire department for years. Moreover, Besse would never hesitate to help someone else.
“He’s always the first to put up his hand,” Schuler said.
Anyone interested in providing auctions items can contact Lisa Perry at 403-625-8862 or Neil Schuler at 403-682-9843.
A GoFundMe page called “We got your back Besse” has been set up. Donations can also be e-transferred to we.got.your.back.besse@gmail.com, and cheques made payable to Krista Minish can be brought the night of the hockey benefit.