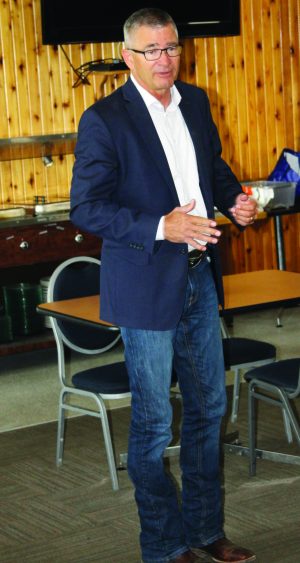 By Rob Vogt Local Press Writer
Travis Toews wants to be the next leader of the United Conservative Party, and premier of Alberta, because he feels he is uniquely positioned to unite the party and bridge the gap between rural and urban voters.
Toews made a stop at the Bridges at Claresholm Golf Club on July 25, where a crowd of approximately 20 people came out to hear him.
The reason he is running for the leadership of the party is the same reason he first stood for public office in 2019.
“It was my care for the province,” he said in an interview before the gathering.
He looked at the trajectory of Alberta, the government of the day, and he said he feared the opportunities, prosperity and freedom would not be there for the next generation.
“I wanted to give back,” Toews said. “Alberta is an incredible place.”
That could be anything from pursuing business to raising a family.
Consequently, he has stepped up and offered his leadership to the party and the province.
“We’ve made great progress,” Toews said.
However, he said, unity is crucial and ensuring Albertans are heard is a top priority.
“That’s critical,” Toews said, adding it is a concern he has heard as he has travelled the province.
Government MLAs all have a voice and they will have a full opportunity to bring their views to the table.
“I’ll not only tolerate divergent views, I’ll welcome them,” he said.
Toews stressed he is also uniquely positioned to bridge rural and urban Alberta. He is not only comfortable in Calgary and Edmonton, but lives and ranches in northwest Alberta.
He has heard several different concerns throughout his campaign as well.
One is Alberta’s place in Confederation, and the obstructionist activities of the federal government.
The federal fiscal transfer system needs fundamental restructuring.
“There’s a deep sense Alberta is not getting a fair deal,” Toews said. “We have to stand up for Alberta’s economic interests.”
His plan is to strengthen Alberta using a tangible, concrete approach.
Overall, that means not over promising and under delivering, and less bluster.
“That (previous) approach has led to a lot of disillusionment,” Toews said.
His approach is to be assertive and strategic. It will include repairing the equalization program, and he supports an Alberta pension plan.
“I’ve done a lot of work on that,” Toews said.
He said he also personally believes there are opportunities with a provincial police service.
However he would consult with Albertans and municipalities.
He has heard people want better enforcement of laws and less criminals back on the streets, and a provincial police is part of that solution for him.
“I commit to working with rural municipalities and rural Albertans,” Toews said.
Affordability is another major concern.
Toews was minister of finance until he was required to resign in order to run for the party leadership.
As finance minister, he delivered responsible fiscal policy in times of inflation including a balanced budget with a surplus. Essentially it means spending less, borrowing less, and taxing less.
“That’s what I looked to achieve as minister of finance,” Toews said.
The government also suspended the fuel tax while he was finance minister.
As premier, he said, he would make that permanent, providing predictability to Albertans.
He would also make permanent the natural gas and fuel price protection.
Both of these measures are linked to the price of oil.
“It’s about Albertans benefitting from an owned resource,” Toews said.
He is committed to eliminating the interim stage of the graduated driver’s licence, which affects 500,000 Albertans driving, and is not doing its job.
Toews is committed to utilizing any budget surpluses.
A portion will pay down debt from the electricity generation overbuild. He said this debt, which is passed down to consumers on their bills, hangs over consumers.
He is committed to a child tax credit of $2,000 per child, which would work like a tax exemption on personal taxes.
“It would provide families some additional relief,” Toews said. “It’s about reducing the tax burden.”
Agriculture is an important part of this area, and Toews has a background in agriculture, as past president of the Canadian Cattlemen’s Association.
He wants to reduce the regulatory burden on agriculture producers, and will introduce measures to attract agriculture manufacturing and processing.
Toews also wants to stand up for Alberta’s vital economic interests against measures such as labelling on ground beef, which was abandoned, and on the arbitrary decision to encourage the reduction of fertilizer use, at a time when producers should be growing more.
“I absolutely commit to defending the vital interests of agriculture,” Toews said.
He was in New York a few months ago while still finance minister, and every conversation he had turned to energy and food security.
“We need to increase production,” Toews said.
“I can bring strong, steady, principled, positive leadership to this party and this province,” he concluded. “I think I’m uniquely positioned to lead this movement.”