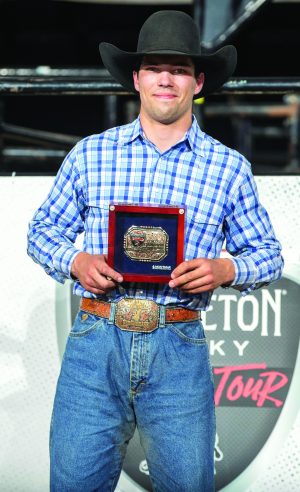 By Rob Vogt Local Press Writer
Claresholm Bullrider Griffin Smeltzer has won the first PBR (Professional Bull Riders) Pendleton Whisky Velocity Tour Event of his career.
The 22-year-old cowboy travelled to Wichita, Kansas on April 23 for the event.
Smeltzer turned in two rides out of two attempts in INTRUST Bank Arena, earning his first victory on the organization’s expansion series, winning the PBR Nexgrill Invitational.
The Claresholm rider drew the bull “Jingle and Go” in Round 1, earning a score of 86 points.
That result put him fifth in the championship round, where he drew the bull “Axel Surgeon”.
Smeltzer brought the crowd to its feet as he hung on for eight seconds to score 86.5 points.
It was the top score in the championship round, and earned him the event championship.
For his efforts, Smeltzer earned 38 world points, moving him up him 13 positions in the world standings from No. 64 to No. 51.
Smeltzer, who is seeking his first berth to the PBR World Finals when they debut inside Dickies Arena in Fort Worth, Texas, May 13 to 22, is now within 40 points of the Top 35 threshold to qualify for the sport’s most prestigious event.