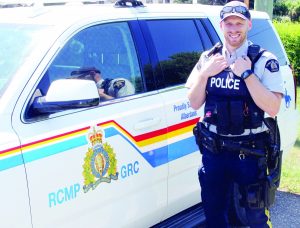 By Rob Vogt Local Press Writer
The Claresholm RCMP has welcomed a new member, who brings a range of experience in rural policing.
Constable Chad Lengsfeld started in Claresholm near the beginning of July, and has been getting to know the community.
“It’s been good,” he said.
Originally from Calgary, he worked there before joining the RCMP, where his first posting was in Hanna in 2018.
Now he has transferred to the Claresholm detachment.
Married with four children, they wanted to be near the foothills but also closer to family.
“I’m pretty excited to see what’s out here,” Lengsfeld said. “I want to be part of the community.”
He encourages anyone who sees him around town to say hello.
“I enjoy educating the public on what the police can do,” he said. “I’m happy to answer any questions.”