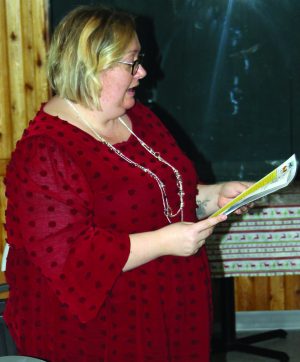 By Rob Vogt Local Press Writer
Despite the impact of the pandemic, that largely shut everything down at certain parts of the past year, the Claresholm and District Chamber of Commerce had another busy and productive year.

The chamber held their annual general meeting in-person at Putters in the Bridges at Claresholm Golf Club on Feb. 17, attracting about 20 people.

Outgoing President Amanda Zimmer took a few minutes to outline the past year in her president’s report.
There were several highlights.

Community Futures Alberta Southwest offered a grant to pay membership fees for all interested businesses.
The 2021 trade fair was cancelled due to COVID-19 restrictions, and the 2021 annual general meeting was held by video conference.

The chamber sent letters of support for community facility enhancement program grants for the zamboni at the arena and playground equipment by the Kinsmen Club of Claresholm.

Sheila Karsten, a part-time administrative assistant, was hired and started in May with office space at the new town office and multi-use community building.

A chilli cook-off was put on during Fair Days in August, with Denise Spencer winning the event.
The chamber hosted four well-attended networking nights, and partnered with the Claresholm Local Press on a municipal election candidates’ forum.

Assisted We Love Film Alberta with featuring the area for possible film and television locations.

The chamber decorated a site at Centennial Campground for the Christmas Cruise light display.
The chamber sponsored an academic award for exemplary work ethic in work experience by a Willow Creek Composite High School student. It was won by Teagan Gustman.

The chamber also received a $1,000 bursary from the Chamber Group Insurance plan program.
Throughout the year the chamber advocated for its members with a direct link to town council in council representative Mike Cutler.

The Chamber also continued the Labour Market Partnership with the town’s economic development committee and Community Futures Alberta Southwest to leverage current activities, staff and financial resources to champion workforce development as a driver for economic prosperity in Claresholm.

The chamber executive continued work on the chamber’s strategic plan; looked to other chambers for examples of policy for voting privileges for appointed representatives; and prepared an amendment to the membership requirements policy for presentation at the annual general meeting.