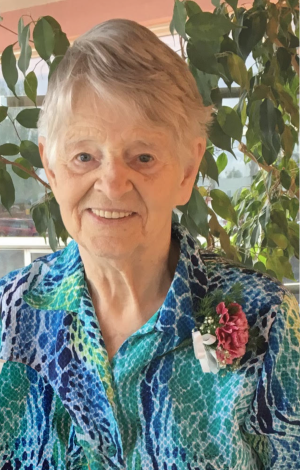 August 16, 1930 – July 13, 2021
Barbara Vegter passed away peacefully the morning of
July 13, 2021, with her family by her side.
Barbara was born in Bolzward Friesland, Netherlands to Trientje and Haring deJong on
August 16, 1930.  She was the fifth of eleven children. She immigrated to Canada at the age of 18 and settled in Picture Butte, AB. She met Albert at a church picnic in Iron Springs and they were married in Iron Springs on
March 24, 1954.
She and Albert were blessed with four sons: Charlie (Debbie), Harvey, Arnold (Chiki) and Edward (Melanie); grandchildren Angela Vegter and Melanie Parisian, Landon (Erin), Alyssa (Chris), Vanessa (Lindsey) Vegter, and Kaitee, Scott and Eric Vegter; great grandchildren Janelle Kemery and Cole Parisian, and Deah and Evan Vegter.  Besides her immediate family, she is survived by her brothers: Durk, Harold, Ed and John; and sisters, Joanne and Wilma.
Barb and Albert worked for several farmers in the Picture Butte, Turin and Iron Springs area. They moved to Claresholm in 1965 starting their legacy in baking, first at deJong’s Bakery and then four years later branching out on their own, starting A & B Bakery.
Albert and Barb were rarely apart for their entire 67 years of marriage.  She always enjoyed being active. Time was spent camping and boating; later on, playing golf, swimming, travelling and motorbike riding. She enjoyed these activities well into her 80s. Barb’s faith was an essential part of her life and she was an active member of the Granum Christian Reformed Church.
She spent her last few years first at the Willow Creek Continuing Care Center with Albert, but was then moved to Bethany Riverview in Calgary, for two years.  When she was finally able to return to Claresholm, she knew she could rest, knowing Albert was by her side. We are thankful they were able to be together again for the last two weeks of her life.
Friends and family are invited to celebrate Barb’s life on Saturday, July 17, 2021. A Visitation will be held at Zentner Funeral Homes, Claresholm, from 10:00 – 11:00 am, with a family burial to follow. A Memorial Service will be held at 1:00 pm at the Granum Christian Reformed Church.
If you desire, donations may be made in Barb’s name, to the Claresholm and District Health Foundation, Box 2638, Claresholm, Alberta.
Please visit zentnerfuneralhomes.ca for more information and to leave a message of condolence.