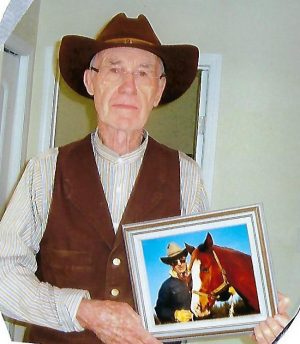 August 13th, 1936 – April 6th, 2021
John Abernethy Simpson passed away peacefully after suffering with Alzheimer’s disease on April 6, 2021, at the age of 84 in Claresholm, Alberta. His wife Catherine of 57 years was by his side.
He was a loving and devoted husband to Catherine Jessie Simpson and adoring father (Durdle) to Janet Catherine Rosenthal and Mary Louise Friedrich (and Jason). World’s best Papa (Papa Shooter) to Matthew David Rosenthal, Joshua John Rosenthal, and Mason John Friedrich.
John Simpson, born in Toronto, ON, graduated with a Forestry degree from the University of Toronto and enjoyed a long career with the Ontario Ministry of Natural Resources. The highlight of his career was as District Manager of Algonquin Park, where he truly was at home on the lakes and in the forest. After retiring, John and Catherine moved out west to Stavely, AB, where he roamed the range like the cowboy he was in his heart. He loved the outdoors and competing in Cowboy Action Shooting.
John made an impact on everyone he met in his life with his kindness and humour. He was always known as an honest and loving, true gentleman. The world was a better place with him in it.
John’s family would like to thank the caring personnel at both the Claresholm Hospital and Willow Creek Care Centre. There will be a private family ceremony held and a memorial later in the summer back in Muskoka, Ontario for John.
In lieu of flowers, donations may be made to the Claresholm Health Foundation or charity of your choice. Condolences may be forwarded to the family at www.zentnerfuneralhomes.com.
“Happy Trails to you… until we meet again.”