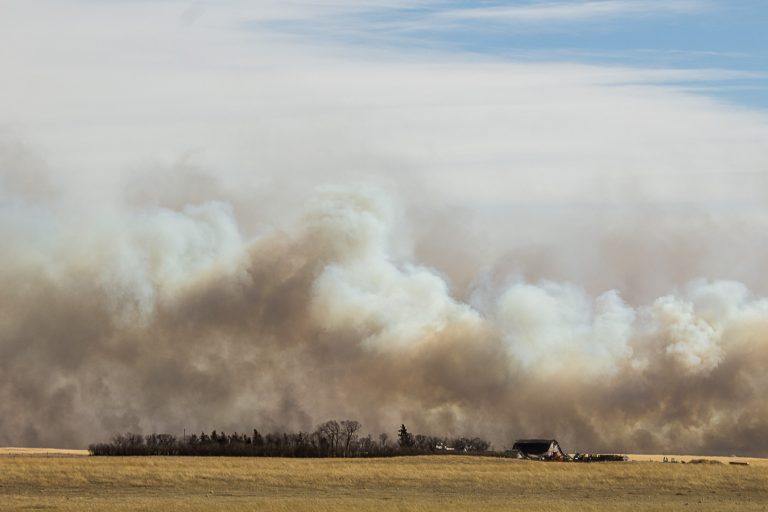 By Rob Vogt, Local Press Writer
Smoke could be seen for miles Sunday afternoon billowing from fires west and east of Claresholm and east of Stavely.
As wind gusts reached 124 kilometres per hour, fire ravaged more than 6,500 hectares, with approximately 11 properties with buildings that were damaged. Unfortunately four of those 11 were houses that were lost.
Property damage and the impact and loss of livestock was also still
being assessed at press time.
The calls started coming in at about 11 a.m., said Kelly Starling, manager of emergency services for the Municipal District of Willow Creek, when fire departments were called out to five motor vehicle collisions M.D. wide.
“Crews were busy with that,” Starling said.
Then, at 12:30 p.m., a structure fire in the Claresholm area was called in. Fire departments from Claresholm, Stavely, Granum and Nanton were deployed to that fire.
The Fort Macleod fire department was on their way as well when another call was received. There was a grassfire in the Fort Macleod area, so crews were dispatched to that fire.
A third fire call came in, this one in the Stavely area.
At that point Starling enacted the M.D.’s mutual aid agreements with their neighbours.
Crews from Lethbridge, Vulcan, and Foothills Counties were on their way to help.
“They willingly and very promptly sent mutual aid,” Starling said.
As the fire spread, community members responded with water trucks and tractors with discs.
M.D. graders, bull dozers, and those farmers with tractors and discs went to work.
“They created fire breaks,” Starling said.
The idea was to take the fire’s fuel load away and stop its momentum when it hit dirt and had nothing to burn.
The goal was to get ahead of the fire.
“They helped build a break miles up the road,” Starling said.
With the fire moving at a speed of 12 to 14 kilometres per hour, any shift in direction could bring a new threat.
Consequently, the Village of Carmangay, still smarting from the burning of the historic Grange Hotel overnight, was evacuated.
Firefighters were also evacuating farms and ranches and fighting to protect homes.
An evacuation centre was set up and running at the Claresholm Community Centre within 20 minutes of the call, operated by town staff, including Family and Community Support Services.
Barbara Bell, director of FCSS, said about 10 adults and that many children again registered at the centre.
“The main reason is it is a safe place for them to shelter and catch their breath,” she said.
The main reason for registering was to know residents were safe in case people came looking for them.
Water, coffee and donuts were provided, with supper coming in the evening, and toys available for children.
The evacuation centre also was able to help people find accommodation or contact their families if needed.
Forestry was also brought in, originally called for air support. They supplied a helicopter which provided an aerial view of the scope and magnitude of the fire.
They also responded with three crews who were able to take out vegetation.
“To have that support was incredible,” Starling said.
Power was out to rural residents, including a number of power poles down in the Stavely area, as well as the Hamlet of Granum, but crews from AltaLink and Fortis worked to restore power. Gas was also out and Atco was working to restore service.
FIre crews were still on scene Tuesday watching for and dealing with hot spots.
The Municipal District of Willow Creek is seeking information from any individual residents who have suffered losses during Sunday’s wind and fire: names, address, phone number, damage and needs and are requesting that they contact the M.D. office at 403-625-3351.
An account has also been set up at Chinook Financial for relief for victims. The account is called “Claresholm and Area Wildfire Victims” and people can visit the branch or send eTransfers to claresholmdisasterfund@hotmail.com
“It was a joint effort,” Starling said of the entire operation.
Starling stressed this was proof of the value of the intermunicipal agreements put in place between the M.D. and the towns.
“There was amazing support from the neighbours and community members too,” Starling said. “Thank you to everyone who helped out.” 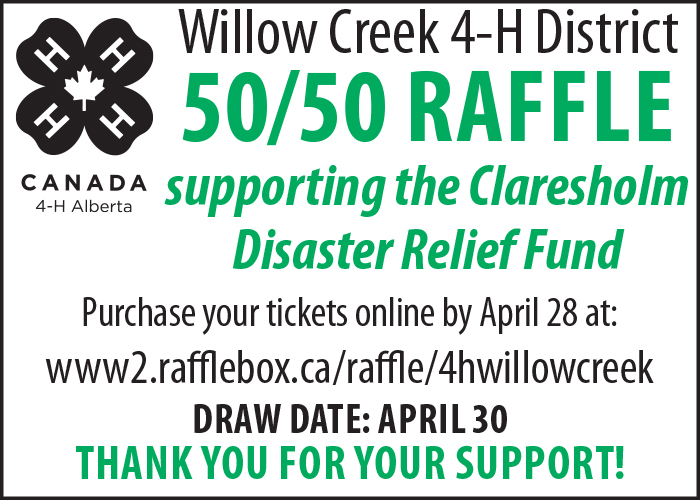