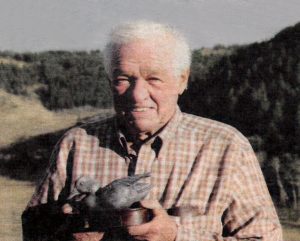 February 21, 1927 – May 2, 2021
He is survived by his wife, Sheila; three daughters, five grandchildren and one great-grandson.
Jack graduated from U of T as a Geologist and had a long career with Mobil Oil which brought him west in 1953 and included foreign placements in Libya and Dallas. But it was his retirement in 1987 that brought him to his favorite place – the Porcupine Hills.
There he built his dream home on a ¼ section and transformed a hilltop into a prize-winning garden. For 30 years he enjoyed the ranching community that accepted a city man and shared his space with hunting buddies and the various wildlife. Winter months were spent in Arizona (after hunting season of course!). When the time came to leave the Hills in 2018, a move was made to Stathmore to be closer to family, but the Porcupine Hills remained close to his heart to the end. It was Jack’s request that no service be held.