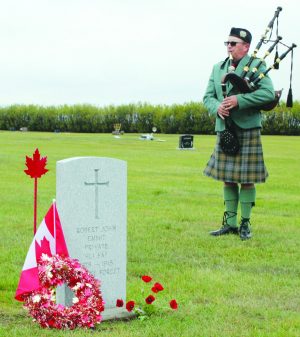 By Lawrence Gleason, Local Press Writer
Considerable research resulted in the discovery of two long-lost graves of military servicemen who were laid to rest in the Granum cemetery.
Ground penetrating radar and research of that included records kept by the former Town of Granum has resulted in finding the graves of Private Robert John Emmit, (HLI SAF), a Boer War veteran who died in 1915 at the age of 37, and Private Alroy Vernon MacLeod of the Royal Northwest Mounted Police, a First World War veteran who died in 1930 at the age of 33.
“After much research involving the Granum and District Historical Society, the Municipal District of Willow Creek, and the Last Post Fund, the unmarked graves of two veterans were located in the Granum cemetery,” said John Connor, chair of the Granum and District Historical Society.
About 40 people attended the service at Granum cemetery on Saturday, Sept, 11, including several dignitaries, representatives from the Last Post, a Royal Canadian Legion organization that conducted the research and organized the somber ceremony at the Granum cemetery. Also in attendance was a colour guard comprised of an RCMP member from Fort Macleod and members of the Claresholm Legion branch.
Much of the research to find the graves of the missing servicemen was conducted by Yvonne Sugimoto, a volunteer director with The Last Post.
Sugimoto said, “I came across Alroy’s obituary first. Then I went about looking for his final resting place. Fortunately the people of the Granum town office at the time were very accommodating, and allowed me to search through some of their records.”
Sugimoto said finding the grave of Robert John Emmit was far more difficult.
“It took me years to put that one together. Initially I found the record that indicated he was buried here. Then I looked for his obituary. His story was very tragic. I felt compelled to find and mark his grave.”
She discovered Emmett served in the Boer War.
“The only way, after years of looking, that I was finally able to match up this particular man with his records, was I went to his homestead record and matched his signature to his signature on his enlistment documents. But it did take me a long time to do that.”
Another director with the Last Post Fund, Glenn Miller, a retired Warrant Officer, said the organization’s mission is to ensure the passing of every veteran results in a dignified funeral burial and a marker.
“Sometimes we don’t know that veteran exists. Our unmarked grave program serves that mission,” said Miller. “Yvonne does a lot of work as a volunteer to find these veterans. We would like to have more volunteers just like her. If we find one veteran in an unmarked grave in the middle of nowhere and are able to honour them it is worth it.”
Member of Parliament for Foothills, John Barlow, said, “To the volunteers, thank you for all the work you have done to remember two men who many have us didn’t know, we did not know their history – until today. Thank you for your hard work in and sharing the stories of these two men and their sacrifice they made on behalf of our country. They will be remembered on this day and for generations to come.”
Local MLA Roger Reid said he was pleased so many generations were in attendance to honour the two servicemen.
“It is never too late to pay our respects to these people. To Emmett and Trooper MacLeod, we honour them and provide them dignity as we remember their sacrifice.”
Reid added, “I think it is appropriate that today is a little overcast, a little cool and a little unpleasant. It reminds us that life is not always pleasant. For those who chose to serve their country in war they know first hand how unpleasant the world can be. I am grateful for those who went to fight for freedom for all of us including members of my own family.”
Miller said, “We ask that Canadians across Canada search their own family trees, you might find that perhaps a grandpa our grandma served in the military and do not have a marker. You can reach out to the Last Post Fund and let us know. We can help in honouring that veteran.”