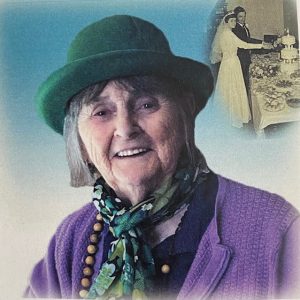 Eileen Patricia Cable was born on May 28, 1933, to Richard and Mary Woosnam (nee Bradshaw), in London, England and passed away in Claresholm, Alberta on February 11, 2021.
Eileen spent her early childhood in Norwich, Norfolk England, where she lived with her parents, and only brother John. Eileen applied to and excelled at the Training College in Portsmouth and after graduating took a position at Long Stratton primary school. It was during this time she met, John Cable, and was married on September 8, 1958. They set up house at Woodlands Farm, and raised three children there. She went back to teaching at Eastholme, Harleston, until emigrating to Canada in 1971.
Eileen taught in King City, Ontario until the family relocated to Manitoba in 1973 where they bought a farm in Arrow River. Here she kept busy with her many interests: photography, sewing and crafting. It was whilst living in Arrow River that Eileen took a position as librarian in Birtle. Once the farm sold, her photography career with her husband John took off, taking pictures at many, many weddings, graduations and functions for the surrounding communities.
In 1983 Eileen decided to attend Brandon University to obtain Canadian qualifications to teach. She earned a Bachelor of Arts with a major in English and Certificate of Honorable Mention for Brandon University Silver Medal in Native Studies in 1987.
Eileen began a long career teaching at Brandon Correctional Institute in 1988, working with the John Howard Society in tandem, to teach literacy. One of the highlights of her career was receiving the Governor General’s Award for Literacy from Mila Mulroney in 1992.
After retirement Eileen had time to devote to her many and varied interests and hobbies. She was a voracious reader, sewed, knitted, crocheted, loved photography, and spent a lot of time just socializing. She enjoyed square dancing, singing in the choir, loved watching ballet and figure skating, show jumping, and also really enjoyed music. Eileen was a collector, most notably of stuffed animals, and little china figurines, ceramics and china. Eileen travelled far and wide, meeting hundreds of people when she joined the Red Hat Society which she enjoyed for many years.
Predeceased by her husband John, March 3, 1992, grandson Ryan, March 30, 2001 and great -granddaughter Peyton, November 9, 2011.
Eileen leaves behind her three children: Penny, Shaun and Trudi; 13 grandchildren; 23 great grandchildren; and her brother John.
Thank you to the wonderful staff at the Willow Creek for the care she received while living there and to Dr. Jones and the staff at the Claresholm General Hospital for the great care and support.
A celebration in memory of Eileen’s life will be held at a later date. Interment at Stavely Cemetery.