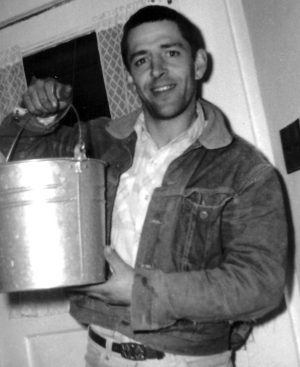 (William) Ray Anderson passed away at Willow Creek Continuing Care Centre in Claresholm, Alberta on April 28, 2021 at the age of 81 years. Ray had the onset of Parkinsons and Dementia in the past couple of years of his life, but died peacefully in the middle of the night.
Ray was born to William and Mabel Anderson on October 23, 1939 in Port Alberni, BC but was raised in Claresholm. In 1963 Ray married Sylvia (Nelson) and they spent their adult lives working and raising a family (Kerry Troy and Alisa Ray) in Calgary.
Ray worked a number of jobs including truck driving and even a ranch hand, before becoming a leading construction supply salesman during Calgary’s boom times (most notably with Universal Fastening Devices). In 2007 the couple retired to Vulcan, Alberta.
Ray always had a terrific memory for dates, places, directions, history, but also sports. He loved the Calgary Stampeders and later the Flames and Blue Jays. He had an encyclopedia of statistics in his head. Ray loved both to watch and to play golf, and one of his greatest memories was when he and his brother-in-law Fred Filbrandt got to help on the course during a professional tournament.
Ray was an avid reader, especially of the Old West and had a collection of over 100 hard cover works of prolific novelist Louis L’Amour.
Ray was pre-deceased by his wife, Sylvia; father William, mother Mabel, and brother Ron (Corinne).
He leaves to mourn his passing: children, Kerry (Michelle), and Alisa (James McWatters); sister, Wendy; grandchildren, Eric (Ally) Anderson, Jesse McFarlane, Ford McFarlane, Cole McFarlane, Jett Spencer, Brennan Anderson, and Garrett Anderson; and several nieces and nephews.
A celebration of life will be held at a later date.