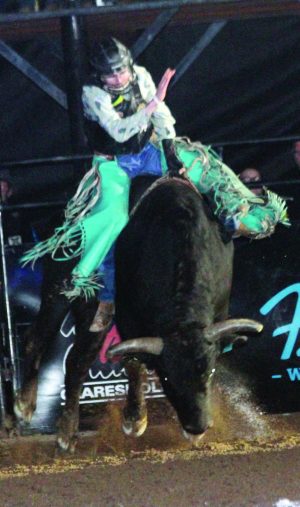 Eight seconds - The seventh annual Chad Besplug Invitational Bull Riding took place at the Claresholm Agriplex this past Saturday, Feb. 29. Here, Logan Biever of Claresholm, turns in a ride of 83, which earned him fourth place. The event is put on by Besplug, a Claresholm native and former Canadian and Calgary Stampede Centennial bull-riding champion. Photo by Rob Vogt

It was a night where the bulls shone almost as brightly as the cowboys trying to hang on to them for eight seconds.
The seventh annual Chad Besplug Invitational Bull Riding packed the Claresholm Agriplex on Saturday, Feb. 29, for an evening of thrills and even more spills.
Once all the dust and smoke machines cleared, Jared Parsonage was the last man standing, taking home top spot and the championship guitar that is part of all events Besplug puts on.
However, it was an eventful path to the championship round.
Parsonage, of Maple Creek, Saskatchewan, turned in the top ride of the long go round with a score of 85.5.
Michael Ostashek, of Edson, was second with a score of 84; and Kyle Brown of Didsbury was third with an 83.5.
Claresholm native Logan Biever checked in at fourth with an 83; followed by Jordan Hansen, of Calgary, and Lonnie West of Cadogan, each with scores of 82.5.
Garrett Green of Meeting Creek was seventh with a 79.5; Ethan Schultz of Strathmore had a 78; and Shay Marks of Sunnybrook, had the last qualified ride with a score of 76.
Tyler Craig of Crossfield drew the final spot in the championship round.
Although he was bucked off, he advanced because he stayed on his bull the longest before getting bucked off.
The long go, or championship round, turned out to be a war of attrition.
Rider after rider was bucked off, until just the top three remained.
Brown was bucked off, then Ostashek was bucked.
Since the winner is determined by the best score on two bulls, with the scores added together, Parsonage was already guaranteed the championship.
However, he wanted to turn in a qualified ride to secure the championship.
He mounted the bull and rode as long as possible, before the bull finally got the best of him.
Still, Jared Parsonage was the champion and received the championship guitar from Chad Besplug.
Parsonage said he had seen Besplug, who was a Canadian and Calgary Stampede Centennial bull-riding champion, ride when he was coming up and looked up to him.
Now, he joins the ranks of those riders who can call themselves champion of the Chad Besplug Invitational Bull Riding.