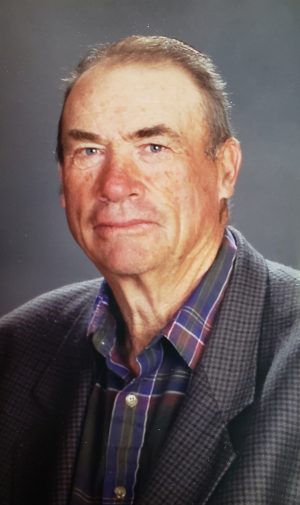 Robert Charles McKee passed away on Thursday, October 29, 2020 at the age of 86. Bob was born in Claresholm on March 4, 1934 the youngest child of David and Agnes McKee. His parents owned a dairy farm 15 kilometres northwest of Claresholm where he grew up with older sister Margaret and brother Alan. He lived with his Aunt in Claresholm during his early education, and only spent weekends and holidays on the farm. At 17 he left school, returned to live on the farm and start his own farming operation. He farmed for several years and obtained off-farm employment as a civilian employee for the Claresholm Flying School located at the Airport. He was to work there for the next 18 years sharing his time between working at the airport and farming. Over the years, Bob and Kaye purchased more land and switched from raising sheep to cattle ranching. They left the farm in 1986 when John and Jenny returned to take over the ranch. After a short interval of living in Claresholm, Bob and Kaye purchased land 3 miles west of Claresholm and lived there until 2017. When Dave retired, he took over their farm site and Bob and Kaye returned to Claresholm.
In 1955 Bob married Kaye Shand, a registered nurse he met while she was employed at the Claresholm General Hospital. They celebrated their 65th wedding anniversary this year. Bob and Kaye built a house on the 80 acres northwest of Claresholm. They had two sons David Hugh and John Charles. When Kaye went back to work Bob was involved in raising the boys, taking them to Sunday school, minor hockey, baseball, swimming lessons, and football. Bob coached Claresholm Minor Hockey for 11 years with the highlight of his coaching career being the Midget Provincial Championships in 1973.
Bob was very involved in the Waldron Grazing Co-op, board member of the United Church, District Deputy Grand Master with the Oddfellows Lodge, member of the Kinsmen, Stavely Elks, Golden Age Horse Event, Legion, and member of the Claresholm Hospital Board.
Bob enjoyed hunting and fishing, planting a large garden, raising turkeys and chickens. While Kaye was swimming in the Alberta Senior Games, Bob would participate in cycling using a vintage style bicycle. He loved attending all of his grandchildren’s sporting events and family visits.
Bob is survived by his loving wife Kaye, sons David, John (Jenny), grandchildren, Trent (Grecia) McKee, Ethan McKee, Kyran McKee, Maddison McKee, Mikayla(Dustin Butler), great grandchildren, Arenna and Aiden, along with many nieces and nephews.
The family would like to thank Dr. Jones and the staff at the Claresholm General Hospital and Willow Creek Continuing Care Centre for their kindness and attentive care.
Due to the pandemic there will be a family Celebration of Life at a later date.
In lieu of flowers, please donate to The Claresholm Health Foundation Box 2636 – Claresholm, AB T0L 0T0.