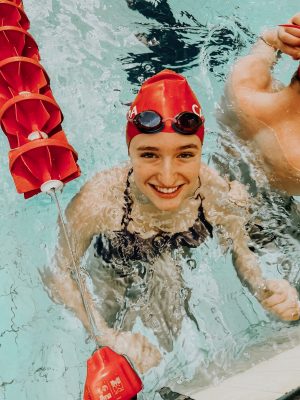 Lifesaver - Meadow Liversuch, 16, of Claresholm, recently competed with Team Canada at the Royal Life Saving Society Commonwealth Festival of Lifesaving in November in Leeds, United Kingdom. She was back in the pool last week participating in a swim-a-thon fundraiser for the Claresholm Junior Lifesaving Club Here, she is in the pool in Leeds.

By Rob Vogt
Local Press Writer
A local swimmer and lifesaver is starting to make waves in international waters.
Meadow Liversuch, 16, of Claresholm was part of Team Canada, representing the nation at the Royal Life Saving Society Commonwealth Festival of Lifesaving in Leeds, United Kingdom from Nov. 21 to 23.
Usually part of the development team, she competed against national team members from other countries, so the competition was stiff.
In the end, Liversuch finished 16th overall, with a seventh place finish in mannequin tow and an eighth place in line throw.
Overall, she competed in seven events and two relays, earning a total of 11 points for Team Canada.
“It was really fun,” Liversuch said. “I got to meet a lot of new people from all over the world.”
That included competitors from Australia, Hong Kong, Scotland, and South Africa.
“I keep in touch with them to this day,” she said.
Liversuch first flew to Toronto on Nov. 15 to meet the team, then flew to the Netherlands then Leeds on Nov. 16.
“It was scary at first because I didn’t know anyone on the team,” she said.
That soon changed as she quickly got to know her teammates.
They practised every day leading up to the games.
“I learned a lot about the sport,” Liversuch said.
The competition went well, but Liversuch was competing against more experienced lifesavers.
“The kids were a lot older than me,” she said.
However, she learned a lot by watching and competing against them.
While there, the team did not travel outside Leeds but, being an historic city, they took in the local sites such as castles, a museum, and walking around an outside mall at night.
“It was super fun,” Liversuch said.
Once the festival was ver, she flew home to Canada on Nov. 24.
Looking back, the highlight was meeting people from all over.
“It was hard saying goodbye,” she said.
Looking ahead, Liversuch is living in Lethbridge now where she trains indoor with the Lethbridge Amateur Swim Club.
In terms of lifesaving, she is aiming for nationals in June in Quebec where she will again see all the people she met in Leeds. After that, she hopes to go to the world championships in Italy.
Her next swim meet is in Edmonton, but she is looking forward to a training camp in Palm Springs, California with the University of Lethbridge and Lethbridge Amateur Swim Club.
“I’m swimming with the (University of Lethbridge) Pronghorns for a week there,” Liversuch said.
Long-term, she is leaving her options open, riding it out and seeing what happens.
“I try to take every opportunity I’m given,” Liversuch said. “So far so good.”